We can learn a great deal about a celebrity’s true self as expressed through fashion on the red carpet. Why they select one haute couture gown over another speaks volumes about what they’re going through at this moment in their lives, how they want to be seen by the public, and most importantly, how they see themselves.

Related story Jennifer Lopez Reveals Her Children Were the Inspiration for One of Her Hit Songs
What does it all mean? 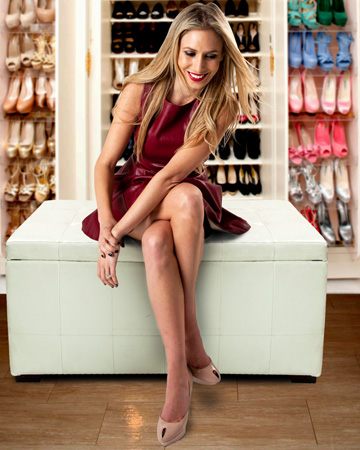 Despite the fashion aftershocks or “afterfrocks” and their stylists’ agonized attempts to pull the best gowns for their client before the big day, when it comes to the final decision, it’s often made far more intuitively than you might imagine.

This year’s best actress winner, Jennifer Lawrence, tried on just two gowns the day before the award show before selecting the third dress, a deep coral silk satin trumpet creation by Dior Haute Couture, to wear into the history books. I’ve spent longer deciding what to wear on a first date!

So let’s peel back the layers of silk chiffon and the facade of hand-sewn sequins to reveal what some of Sunday night’s most polarizing Golden Globes gowns really said about the stars who wore them. 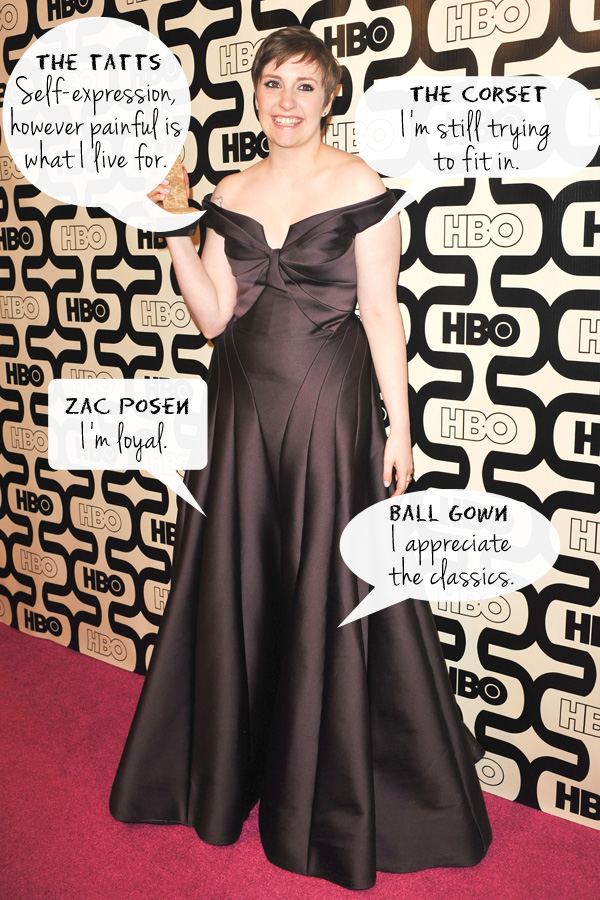 What her gown says: “I’m loyal, I’m real, but I still need your approval.”

Having grown up in the New York artist scene, the Girls creator and winner of best television performance elected to wear a gown by childhood friend Zac Posen. Lena’s decision to wear a gown by her longtime buddy reveals her deep sense of loyalty and commitment to staying true to herself in the face of her whirlwind rise to fame.

A self-admitted fashion lover and usually far quirkier dresser, Lena moved away from her edgier looks for her first major awards show, revealing her respect for the establishment but also (despite her anti-establishment shtick) her desire to be accepted more than she would like to admit.

She may be a fresh voice discussing contemporary women’s issues, but the classic corset and ball gown silhouette reveals she has a love for tradition and is a great student of past greats.

Lena bravely reveals herself in her writing and on screen performances, but when it comes to the red carpet and being a star, she still hasn’t quite come into her own and embraced her fabulous differences.

Our prediction: As Lena continues to ascend, expect to see her embrace an edgier more “her” look as she realizes that she needn’t fit into Hollywood’s convention, when she can simply rewrite it. More edge, less fabric. 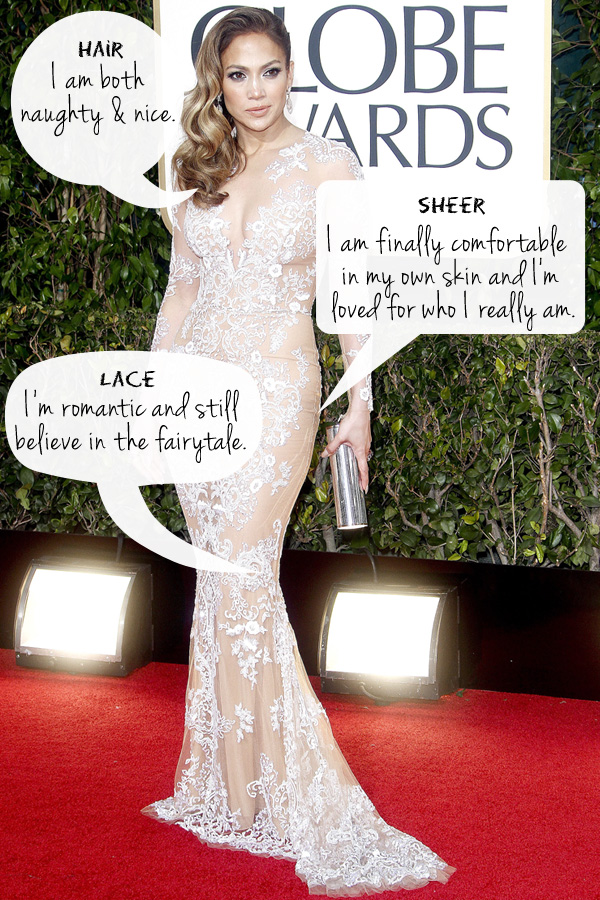 What her gown says: “I’m a star and I can finally be myself in a relationship.”

If there’s anyone in Hollywood who knows that the right dress that dances between scandalous and spectacular can make or break a career, it’s Jennifer Lopez. Her navel-grazing leafy green Versace gown at the 2000 Grammy Awards launched her into a whole new stratosphere and turned her into J. Lo the brand.

At Sunday night’s Golden Globes, Jenny from the block delivered the night’s most risque and high fashion moment in a body-baring, cream lace Zuhair Murad gown that left little to the imagination.

Despite its almost nude look, the choice of virginal cream lace and long sleeves offered the perfect amount of modesty and ladylike appeal. This dress is classic Lopez — as she comes to terms with the fact that she is all at once a sexy, free spirited girl from the Bronx, a powerful mogul, a romantic who wants nothing more than to be in love and treated like a lady, and a proud mother of two.

After years of being in relationships where she either had to be “little miss perfect” or “bad boy babe,” she now realizes that she is a mix of both. The nakedness of this gown reflects an inner peace that comes with finally being in a relationship that allows her to be her true self (instead of someone’s ideal vision of what she should be).

Even her hairstyle — half slick, half classic — mirrors this dichotomy between naughty and nice.

Our prediction: Expect color and drama during the award season as she takes risks and owns every moment. 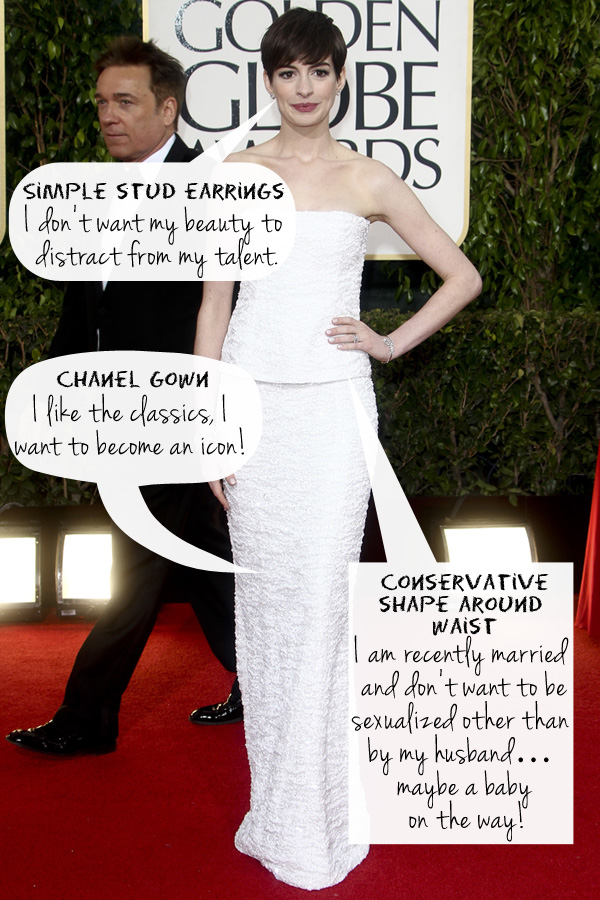 What her gown says: “I want my talent to outshine my celebrity.”

No one plays the role of humble, earnest thespian more convincingly (and dare I say, sometimes nauseatingly) than Anne Hathaway. The Les Miserables winner’s white sequin strapless Chanel gown expressed a desire to show her unbelievable talent naked and unembellished for the world to see.

The white fuss-free detailing and clean, simple lines reflect her inner idealistic leaning. Despite her material wealth, this girl values ideas and ideals above all else. She is a perfectionist and principled in everything she does.

Her uncompromising approach to what she views as right and wrong is both her strength and her weakness. She can easily become so attached to the cause that she becomes extreme in her actions and morally judgmental in her thinking. Despite her holier-than-thou approach to life, if she believes in something, she will fight for it with her life, which makes her a loyal friend and a success in everything she attempts.

Our prediction: Expect a gown hiding a baby bump soon, as marriage becomes the focus.

Up next: Style shrink quick sessions >>