Kate Hudson was one of the most talked about celebs to hit the red carpet Sunday night at the 2013 Golden Globes. We tracked down her hairstylist, David Babaii, to get the inside scoop on her drool-worthy strands. 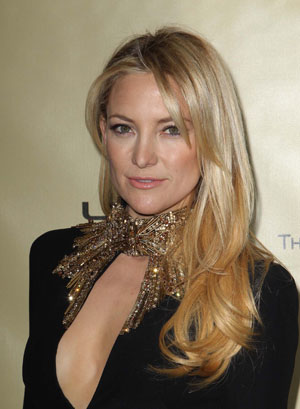 “Soft, voluptuous, healthy hair [that] never looked more glamorous,” he told SheKnows Sunday night. The idea was to create a sexy — yet simple — style that wouldn’t take away from her dramatic Alexander McQueen dress.

Next, he applied IT&LY’s Pure Style Mousse Strong with a medium round brush to the roots area for added volume. Then he switched to a large round brush to smooth and create soft, rounded edges. After drying, Babaii made a natural side part with IT&LY’s Pure Volumizing Eco for added lift and definition.

For Hudson’s bangs, Babaii wrapped her hair around a medium round brush and sprayed a small amount of Pure Volumizing Eco again. He then used a blow-dryer to add a bit of heat, followed by a blast of cool air to set. Finally, he used his fingers to comb through and add a bit of natural tousle.

Tell us: Do you like Kate Hudson’s Golden Globes hair?