Tina Fey and Amy Poehler rocked the 2013 Golden Globes — both on stage and in their fashion choices. Now comes the difficult choice: Who looked better? 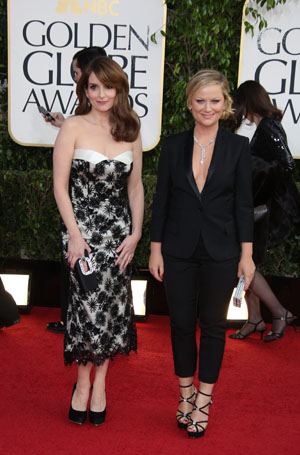 Amy Poehler and Tina Fey did the unthinkable: They made the Golden Globes the most genuinely funny awards show ever.

And they looked hot doing it.

The former Saturday Night Live duo showed us exactly what sort of night we were in for when they appeared on the red carpet looking seriously sexy in polar opposite outfits. Fey went the girly glam route with her L’Wren Scott dress and Salvatore Ferragamo shoes, while Poehler went with a Stella McCartney pantsuit (sans blouse and bra!) and Charlotte Olympia shoes.

Anya says: What red carpet trends at the Golden Globes mean for you >>

And how did Poehler get ready for such a cleavage-baring shot?

“She’s going to have three costume changes with one that shows off some leg and I didn’t want her to have to worry about, ‘What will my legs look like?'” Locke told The Cut on Monday.

“I wanted to give her a golden, glowy look.” 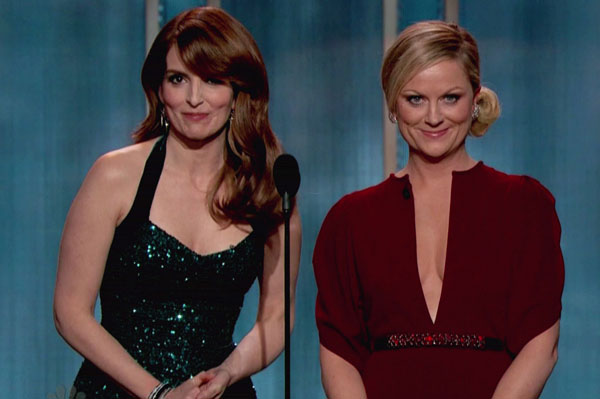 Fey and Poehler only had a couple of wardrobe changes during the show — a form-fitting navy dress (Fey) and two cleavage-baring gowns (Poehler).

Who knew she had such a great set of girls?

Of course, it wasn’t really about the fashion — it was about their cutting one-liners that left us dying with laughter.

Oh, Tina and Amy: Please host every awards show ever.

Fashion face-off winner: Poehler. Her looks were daring — and they paid off.

Tell us: Who looked better at the Golden Globes, Tina Fey or Amy Poehler?