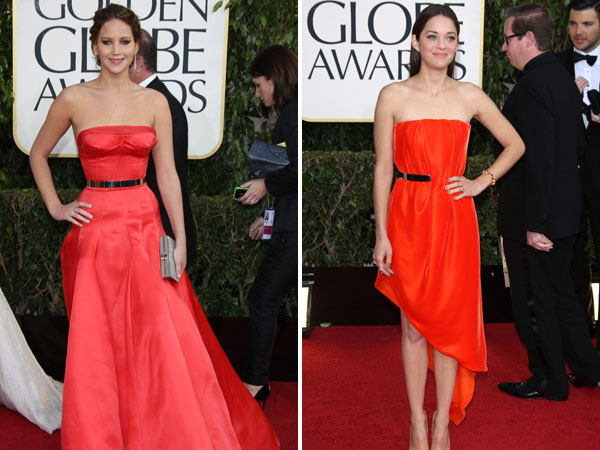 Jennifer Lawrence wasn’t feeling so hot on the red carpet at the Golden Globes, but you wouldn’t know it. The Silver Linings Playbook actress looked stunning in her Christian Dior Haute Couture dress, Brian Atwood shoes and Ferragamo clutch.

But don’t ask her to explain the meaning behind the designer name.

“This is Dior Haute Couture. I don’t really know what ‘haute’ means, but I had to say it,” she told Ryan Seacrest before the show.

Lawrence wasn’t the only A-lister wearing red, though: French actress Marion Cotillard opted for a similar red Dior Haute Couture dress, though she paired hers with Dior shoes and a Christian Louboutin bag.

And, like Lawrence, Cotillard doesn’t get too into fashion — she just uses it as a reflection of her personality.

“If I don’t feel like myself in an outfit — if it makes me feel like a different person — I won’t wear it,” Cotillard told Time magazine last fall. “I always find something that’s kind of crazy but at the same time is wearable and really looks like me.”

Okay, so who wore it better? We’re going with Lawrence here, even if the bodice of her dress did feature those strange crumb-catcher things. The young actress is a star — and this gown just proved it.

We wonder what she’ll wear to the Oscars? We’ll be floored if it tops this.

Tell us: Who was better dressed, Jennifer Lawrence or Marion Cotillard?

57 mins ago
by Taylor Lane