Queen of rom coms Kate Hudson may not have gone home with a Golden Globe last night, but her black Alexander McQueen dress with gold embellishments had me at hello. Meanwhile, Amy Adams stole my heart in her ballerina pink mermaid Marchesa gown. 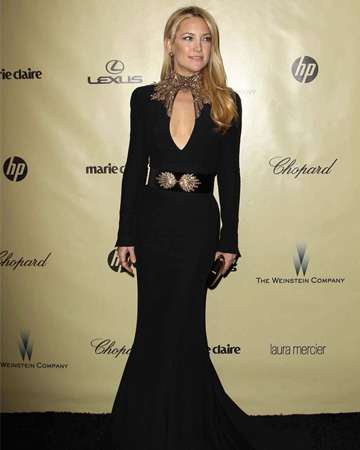 When asked about her choice to wear black instead of color, Kate Hudson told E!’s Ryan Seacrest, “It was a last-minute choice because the other dress weighed 500 pounds.” So, comfort won her over. We can clap for that, right ladies?

I don’t know what the first choice dress looked like, but her outfit change did not fail her. She paid great tribute to Alexander McQueen by wearing this fitted black gown for the 2013 Golden Globes event. It had such a sophistication to it while, in true Kate Hudson fashion, didn’t dare lack a little sex appeal.

The front keyhole cutout showed just enough skin to be Golden Globes-appropriate and still make all her exes drool (and us, too!). The gold details were so elegant and not out of place among the other glittery gowns shown off by celebrities like Hayden Panettiere, Sofia Vergara and Anne Hathaway. 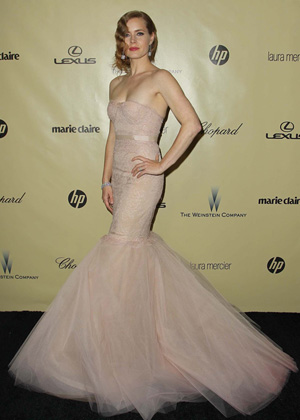 She was one of the first to arrive, and she made an impression I couldn’t forget, even after seeing every other beautiful gown walk the carpet. The lightness of it made her look like a princess and the subtle pink color was perfect for her pale skin tone.

Paired with her retro waves hanging perfectly from her updo hairstyle, the whole look brought a very vintage vibe to the red carpet. 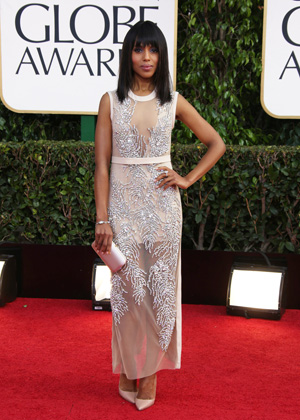 She had a breakout year with her supporting role in Django Unchained, and she has been making stellar fashion choices while promoting the film. It’s been impossible not to notice her!

Last night, as Django Unchained took home two Golden Globes, Washington looked nothing short of fabulous wearing a Miu Miu dress that was a little sheer, a little sparkly and a lot of amazing.