New moms Megan Fox and Claire Danes got a babysitter for the night and walked the red carpet at the 2013 Golden Globes. 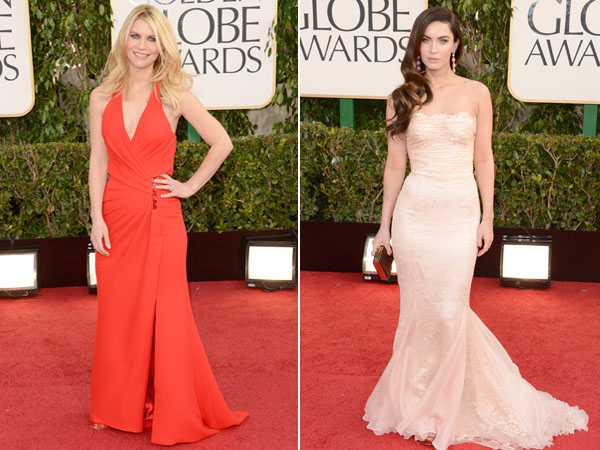 Fox was one of the first celebs to walk the red carpet at the Beverly Hilton with husband Brian Austin Green. The This is 40 actress opted for a Dolce & Gabbana dress with Jimmy Choo heels, Lorraine Schwartz jewels, and a Salvatore Ferragamo clutch.

“It’s tight, it’s lacy and that’s all there is to it!” she told reporters on the red carpet.

Looks like she’s lost the tiny remainder of her 23-pound baby gain, even if she can’t work out.

“I can’t work out yet because my body is still too fragile,” she told The Huffington Post in December. “I try to eat whatever I want, but I don’t eat any dairy, and I guess that’s the biggest diet tip.”

Claire Danes just gave birth to son Cyrus in mid December, but she’s already back in fighting form in her Versace dress. The new mom told reporters on the red carpet that she’s worried about leaking breast milk onto her designer gown.

“I tried [my dress] on for the first time last night around 9,” Danes told reporters of the gown. “How could I refuse?”

Read more: How to get Claire Danes Golden Globes makeup >>

Tell us: Who rocked the post-baby look better, Claire Danes or Megan Fox?