Lena Dunham hit a home run at the 2013 Golden Globes in her Zac Posen dress. 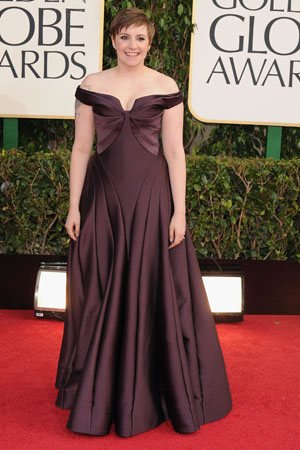 Lena Dunham might like to keep people’s expectations low, but she might have to rethink that after the 2013 Golden Globes. The Girls writer and creator shows up on the red carpet in a brown Zac Posen creation.

The review? She looks fabulous — even if the dress isn’t cooperating.

“My breasts have a tendency to shove my dress to the left, so I have to shove it back,” she told E! on the red carpet of her mini-wardrobe malfunction.

The 26-year-old actress recently told V magazine that she doesn’t put much thought into the whole Hollywood fashion game.

“Now, meeting actresses who such a big part of their job is about what they look like, I feel so lucky to be freed from that prison,” she said. “I ate cake for breakfast on the day of the Emmys, I ate cake for dinner, my workout didn’t require Spanx, and I still feel like I looked better than people expected me to. It was amazing.”

In fact, she tweeted that she’d rather be in bed watching Girls.

“I am excited for the Golden Globes/sad I won’t be in bed with dumplings reading your twitter responses to the @girlsHBO season premiere,” Dunham tweeted before arriving at the red carpet.

The reason? Her fab dress was killing her.

“If Golden Globes support garment kills me I leave my archives to my mother and my ephemera to my 8 year old friend Coco,” she added.

Tell us: What did you think of Lena Dunham’s look at the 2013 Golden Globes?