Will 2013 be the year of pants? It seems like it, judging from the outfits Lena Dunham and Homeland star Morena Baccarin rocked recently. 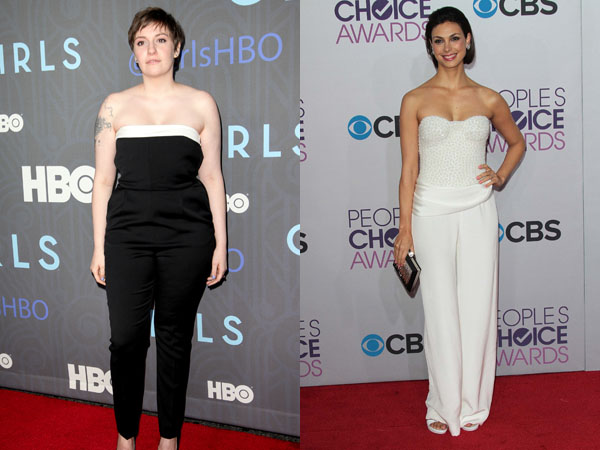 Most stars opt to wear dresses to big events, but a few are bucking the trend by opting for pants on the red carpet.

The Girls writer, director and star opted for a black Valentino pantsuit for the show’s Season 2 premiere earlier this week. The big secret behind the look? No undergarments.

“I’m not wearing underwear,” she told reporters on the red carpet.

At least going commando gave her the confidence to wear the form-fitting jumpsuit in the first place.

“I didn’t think I could get away with [wearing it] because ‘jumpsuit’ seems like such a dirty word,” the 26-year-old added. “But people are acting like it’s a normal thing to do, so I’m just rolling with it.”

It seems like everyone has been talking about Dunham and her fashion choices — or non-choices. She’s often without pants on her hit HBO show, and her character, Hannah, also rocks a mesh shirt this season.

People might criticize her for it, but she just doesn’t care.

“Now, meeting actresses who such a big part of their job is about what they look like, I feel so lucky to be freed from that prison,” she told V magazine earlier this month. “I ate cake for breakfast on the day of the Emmys, I ate cake for dinner, my workout didn’t require Spanx, and I still feel like I looked better than people expected me to. It was amazing.”

Tell us: Do you like the pants look on the red carpet?