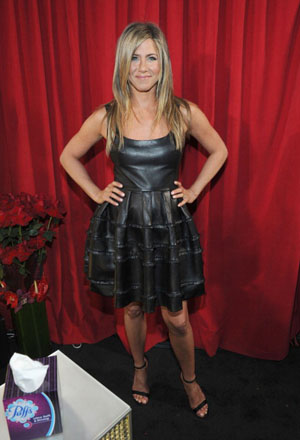 OK, we’ll admit that we were really surprised to see Jennifer Aniston show up to accept her People’s Choice Award for Favorite Comedic Actress.

But, she did. And we’re so glad she came.

Our favorite Friends star showed up at the show wearing a badass black leather dress by Christian Dior. Aniston paired the flirty outfit with Fred Leighton jewelry and ankle-strap heels.

And that’s the look Aniston was going for, according to her styling team — the “bad girl in a pretty dress” aesthetic. However, her hair guru, Chris McMillan, said he wanted to keep it “California babysitter” up top.

“It’s that hair that I always thought was cool when the sitter came over,” he told People on Thursday, adding that he used her line of Living Proof hair products to create the look. “It’s just good, sexy hair.”

All the leather fumes must be going to her head, too: She recently revealed that she doesn’t have anything against another leather-loving star.

“There’s nothing wrong with Kim Kardashian and all those people,” the Wanderlust star says in the upcoming celebrity culture documentary $ellebrity. “If that’s how they choose to make a living, more power to them.”

Don’t expect Jen to be a willing participant in all that tabloid drama, though—and she’s had more than enough of her own, thanks to the years-long Jen vs. Angelina Jolie garbage.

“My line of work is different,” she added. “I want to entertain people.”

What do you think of Jennifer Aniston’s leather dress?