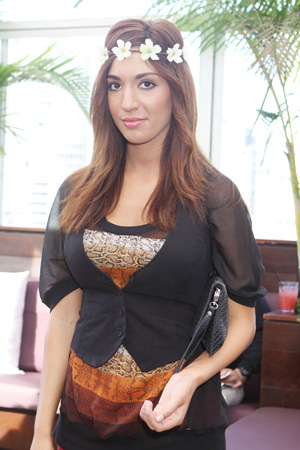 We’re all for a good eyebrow wax — as long as it’s your choice.

“So here I am faced with a standout historical moment in motherhood when I can confirm to myself that my little, adorable, most cuddle-able cutie, baby girl has a Unibrow 🙁 ,” Abraham, 21, wrote on her blog. “I felt bad for her, and I started asking friends…. is this hair just going to fall out… is it just hormones at this age? Well the hair didn’t go away and others started saying it was here to stay.”

Abraham is no stranger to extreme beauty routines: She’s spent $16,000 on plastic surgery in the past couple of years to enhance her breasts and “fix” her chin and nose. Now, she’s already passing her body image issues on to her toddler daughter.

She continued (all typos are hers):

So I told sophia (my daughter who is a late 3 years old) of the little issue on her brow, and I showed her how I waxed mine off, so I tryed to wax her, the second a dab hit the Uni, she touch it with the towel she had in her hand,

UHHH so now, wax was in the towel, and I yanked it back ASAP, but fuzz was not stuck to the wax stuck to her Uni, OMG moment, So now sophia was freaking out, so I had to act like it was a cool science project to get the wax off.

PLOT TO END THIS: Sophia feel a sleep, I got my tweezers and Pluck-pluck-pluck……soph was now saying ouch or anything and still was asleep, I got most of it off and then finally she woke up..I went to sleep .

The next morning I showed her and told her how well she did and she didn’t even know, She was more intrigued now to be ok with upkeeping her non-unibrow. I could tell she was proud.

We don’t even know what to say about this. It’s just… wrong on so many levels.