Scarves are such a blessing in the winter. They’re accessories that are as fashionable as they are functional, but only when they are done correctly. Since we’ve all seen examples of scarves gone bad, let us present our quick guide to keep you on the correct side of scarf fashion! 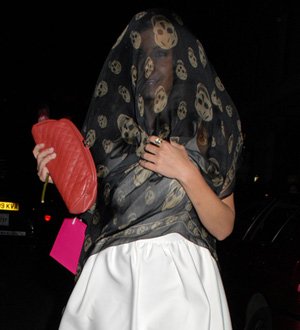 Welsh model Imogen Thomas is breaking so many fashion rules here that we scarcely know where to start. We’ll focus on the scarf. Scarves, for those who don’t know (hello, Imogen), should not be worn over your head. And if you are such a huge celebrity (big ‘if’ here) that you are trying to conceal your face, your scarf fabric probably shouldn’t be sheer. Or covered in skulls. And your purse and shoes should either contrast one another in an interesting way or match perfectly. Imogen’s do neither of these things. 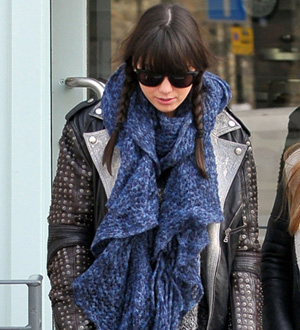 Can we get a “hell yeah!” Here English fashion model Daisy Lowe demonstrates how to scarf properly. Daisy’s leather studded biker jacket is the bomb, and she brilliantly pairs an equally cool scarf with it, without taking away from or clashing with her ultra-cool jacket. This scarf has all the elements of a must-have accessory — an interesting shape, an appealing color without being obnoxious and fringe as a subtle embellishment. And the crowd goes wild. 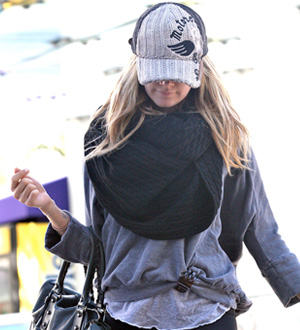 We love us an infinity scarf (the ones that are already sewn in one big loop). Unfortunately this fashion trend, like so many others, is being abused. It’s actress Ashley Tisdale to the rescue with this stellar example of what we mean. An infinity scarf is to be looped about your neck in a becoming fashion, not plastered under your head like a bath-mat. 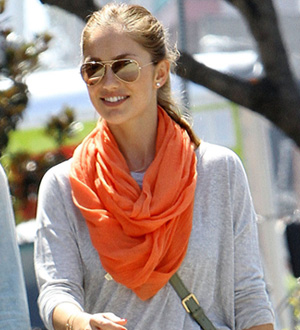 Minka Kelly rescues this look and reminds us why we love it in the first place. Her infinity scarf is looped correctly, and she has chosen a color that complements her casual look and her skin tone. She has not wadded her scarf under her neck, or worse, made a very small loop at the top and a saggy loop at the bottom. 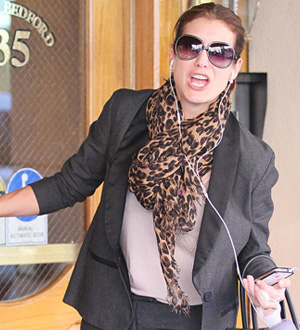 This scarf disaster is heartbreaking because Kate Walsh is firing on all other fashion cylinders. From the jacket to the capris to the bag and shoes, Kate is just a tweak away from perfection. Unfortunately, with this scarf, it’s a rather large tweak. The fabric is fine, but what Kate demonstrates here is the importance of a good knot. Here she has mangled about three scarf wrapping techniques into one, making it appear as though a large boa constrictor is about to have her for lunch. 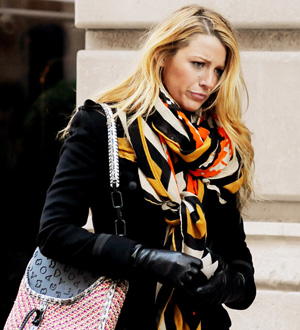 This on-set photo of Blake Lively shows us the correct way to knot a large scarf. It’s hard to tell — Blake may actually be wearing two scarves. The point is, she is demonstrating two extremely important elements of scarfing (yes, I made that word up). The scarf (or scarves) has been layered, not wadded, and the end(s) of the long scarf flows. 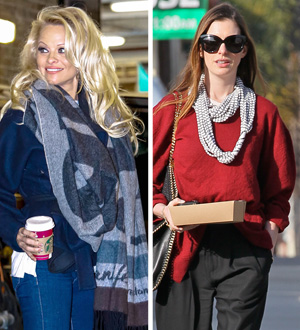 Here we offer a two-fer to demonstrate what happens if your scarf is too big or too small. Pam Anderson is small in stature, thus, she shouldn’t wear a scarf that looks like a blanket around her tiny frame (oh, who are we kidding? Pam could wear a Snuggie in public and make it look good!). For the rest of us, it’s important to make sure our neck accessories don’t swallow the rest of our body. On the other end of the spectrum is Anne Hathaway, who is typically spot-on when it comes to fashion. But what the hell is going on around her neck in this photo? Scarves should make a statement without overwhelming your outfit. But they also shouldn’t underwhelm it! This puny scarf isn’t worth the time it took Anne to put it around her neck. 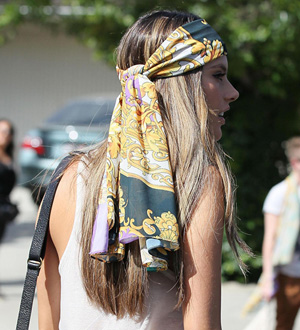 Model Alessandra Ambrosio is strutting major scarf flair in one of our favorite ways — atop her hippie head! This is such a sassy, timeless look that is more or less hard to screw up. It also looks fabulous with short hair.

The only word of caution is to make certain that your scarf is long — a short one is going to look ridiculous. Also, be warned that this look can go, if you aren’t careful, from cool hippie to demented pirate in precious little time.

Half right — half wrong

And somewhere in the middle we have David Beckham and Kim Kardashian. 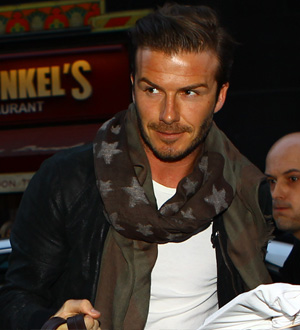 We don’t love this look on David but we don’t hate it either. And here’s why. David Beckham could wear a rubber chicken around his neck and he’d still be one of the hottest guys on the planet. 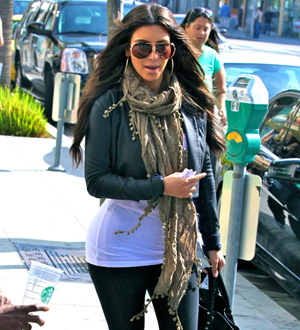 KK’s look hits the middle of the scarf meter. The scarf is amazing, and she’s cleverly worn it with a short jacket. But be warned! If you wear a long fringed scarf with a normal winter coat that has been zipped up, several inches of the scarf will hang below the coat, making it look as if you are in desperate need of some she-scaping.