Traveling abroad can be an exciting, yet overwhelming experience. There’s so much to learn — everything from the culture to what’s acceptable when it comes to tipping (some countries take offense to tipping!). 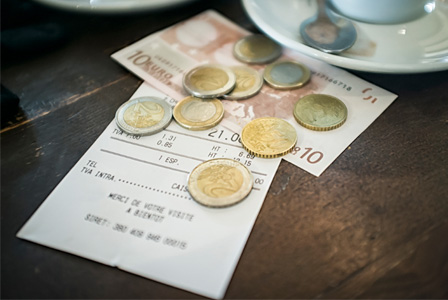 If you plan on traveling abroad, take the time to learn the country’s etiquette, the basics of their language, including hand gestures, and the proper way to tip. Tipping can get very tricky as it varies around the world. Study up on who to tip and how much is appropriate before leaving. This ensures you won’t offend anyone by being too generous or even worse, being too stingy. Servers, bellmen and millions of other workers rely heavily on your tips to pay rent and feed their families, so be a good tourist by learning to tip appropriately.

Note: Scandinavia is the only European region where you don’t need to tip.

Let’s start with the most visited foreign region: Europe. Most European restaurants will include a service charge at the bottom of the bill. Typically, the service charge is about 10 percent, and it’s polite to leave an extra euro or two on top of that. A 20 percent tip is never necessary and, in fact, is considered rude. Make sure to hand the tip directly to your waiter instead of leaving it on the table. For taxi rides in Europe, simply round up the change or leave an extra euro for the driver.

Tip: For taxi drivers, round up the fare and allow them to keep the change.

Tipping in Asia is the most confusing — so learn what’s expected to avoid insulting someone and feeling embarrassed. In most of Asia, a service charge will be added to your bill, and you should not leave anything extra. In Japan, tipping is considered flat-out rude, and in China it’s actually against the law in certain places. The only places where you can tip extra in Asia would be at five-star restaurants and resorts. Due to the large numbers of Americans visiting, it’s become expected to leave a little more for gratuity at places such as these.

Did you know? In India, bellboys may wait outside your room in hopes of a tip. Feel free to give them something small or politely smile and say thank you, as you are not required to tip individuals.

Tipping in India is never expected, but always appreciated. A 5-10 percent tip is considered more than enough, so don’t ever worry about tipping 20 percent like we do in America. If you do tip, it’s appreciated so much that your service will be even better next time. Make sure to tip quietly and be very low-key, as digging through your purse looking for money can be embarrassing to the person being tipped. Tipping taxi drivers in India is the same as other countries — simply round up your fare and let them keep the change.

Other countries where there’s no need to tip include Australia, Slovenia and Spain.