Anne Hathaway opted for some custom-made Tom Ford boots for the New York City premiere of Les Miserables on Monday night. What makes them so special? They’re 100 percent vegan! 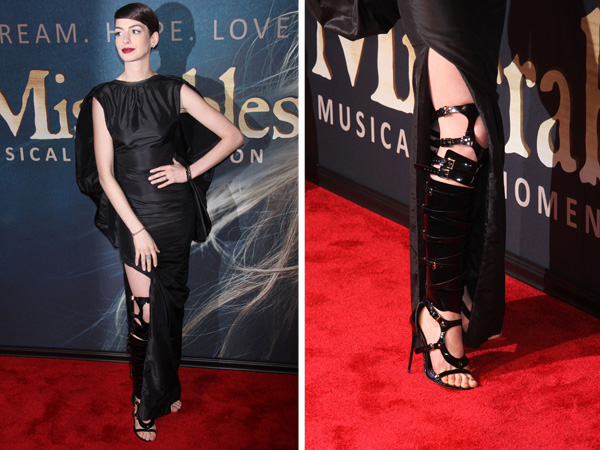 Anne Hathaway went dark in head to toe Tom Ford Monday night at the New York City premiere of Les Miserables — all the way down to her knee-high boots.

The 30-year-old actress turned heads in the bondage-inspired boots, reportedly made of custom vegan “leather” by Tom Ford himself. They’re totally interesting to look at, though they give off a distinct knee brace vibe.

It seems like her role as Fantine in the big-screen adaption of the Broadway classic has really changed her. Maybe it has something to do with the super-short hairstyle she adopted for the role. Not that she was really convinced about cutting it at the time.

“I was faux Zen about it. I’d resolved to cut my hair for Les Mis and to do it on-screen to make it feel real,” she told Glamour for her January 2013 cover story. “And then the morning came, and I was shaking like a leaf. I almost couldn’t do my job. When it was over, I went to the darkest corner of my trailer and I looked in the mirror, and I saw my little brother! But eventually I felt like the coolest girl in the world.”

Then again, the darkness might be because she’s just hungry. Hathaway tried to play off rumors that she starved herself for the role — even claiming that she ate oatmeal paste while on set — but now she’s finally copped to starving herself.

“I just had to stop eating, all for a total of 13 days’ shooting,” she told The Hollywood Reporter last week of her quest to drop 25 pounds.

What do you think of Anne Hathaway’s vegan Tom Ford boots? Share in the comments below!