The eternal debate over which coast boasts better style — East or West — is one that may never get settled, but that doesn’t mean it can’t be explained. As impartial judges, we delve into this age-old fashion fight to find out what it means and where it stems from.

Related story Noah Cyrus Freed the Nipple in a Spellbinding Baby Blue Dress That Was Designed to Turn Every Single Head
Who wins the style showdown? 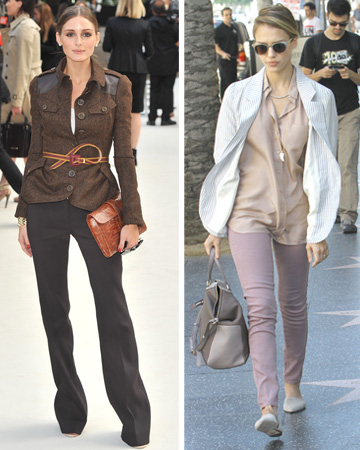 An East and West Coast insider

To get some insider info, we caught up with Marcy Roth, owner and buyer of AccessoryArtists.com. She’s a fashion industry veteran who recently moved from NYC to LA. Given her recent move from one coast to the other, she was able to speak to style on both coasts and she shares her insight with SheKnows.

While still an LA newbie, Roth can still attest that the “California cool” reputation the West Coast is known for is very true. “On the West Coast it’s all about looking creative and casual but also super chic,” she tells us. “Style varies depending on your neighborhood. Santa Monica has a different look than West Hollywood and Silver Lake, for example, but because of the weather, we must get even more creative with accessorizing because layering is only an option three months out of the year.” When it comes to jewelry, it’s all about mixing and matching. “You see lots of layering of small, delicate pendant necklaces or long bolder pendant necklaces that break up long flowing layers.”

East Coast style is definitely more polished, notes Roth, and centers around fashion-forward, structural sophistication. “The East Coast look is smart, buttoned-up and much more serious than its counterpart,” she says. “Handbags, shoes and jewelry are all statement-making style. With jewelry, you see bigger single statement pieces often and possibly a bit more sparkle.”

Some of the style differences come down to weather. “Most West Coast people do not have the range of clothing one is required to have living back East. In New York, we have our raincoats, winter coats, spring jackets, and for the uber-fashionista, maybe even a cape or two,” says Roth.

East vs. West: The rivalry explained

So where did this never-ending feud begin? Much of the rivalry comes down to the fact that each coast has such a distinct style and neither is willing to step down for the other. “I think any time you’ve got two major juggernauts competing, there will always be rivalry, but in this case, it’s mainly celebrity driven fashion on the West Coast, versus the fashion industry on the East Coast,” explains Roth. “In a nutshell, I’d say the rivalry is between reigning queen fashionista Anna Wintour and her stern yet classic way of dressing, versus the queen of West Coast and celeb fashion Rachel Zoe’s less serious ’70s glam looks.”

So whose take on style reigns supreme? It’s really all about personal preference. “I think they both respectfully represent their city’s vibe and attitude in fashion — they’re just very different and people love to debate what’s more relevant today,” notes Roth.

Tips for getting the look

If you’re heading to the West Coast, Roth stresses the importance of never confusing casual with lack of style. “Casual style takes as much effort and thought,” she says. “Keep it fun and a little flirty, and rock those accessories. Try a well cut T-shirt with a draped jacket and a cute pair of booties, and layer on the jewelry to complete that casual chic look and bring an amazing pair of sunglasses.”

If you’re traveling in the other direction, pack neutral colors, smaller prints and lots of texture, advises Roth. “A few dressy tops, the classic LBD and a sassy pair of black stilettos should be staples in your wardrobe,” she adds. “Play up one piece of statement jewelry complemented by more subtle pieces to pull your look together. It can also take you from day to night.”

Where do you stand on West Coast vs. East Coast style? Share in the comments below!