Dannielynn Birkhead might not be able to remember her mother, Anna Nicole Smith, but she is following in her footsteps by becoming the new face of GUESS Kids. 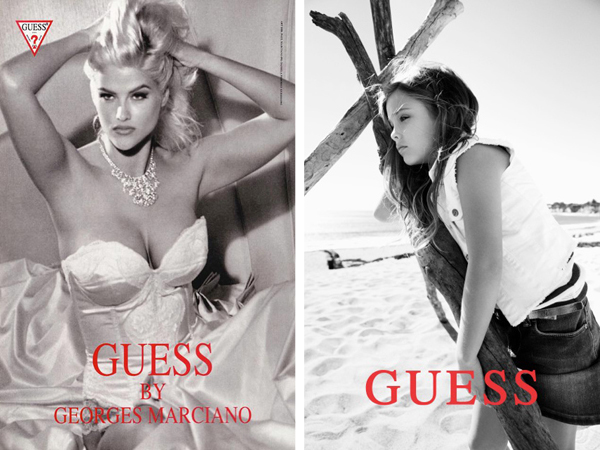 Dannielynn Birkhead is only six, but she’s already following in mom Anna Nicole Smith’s footsteps by posing for a new GUESS Kids ad campaign set to invade billboards and magazine ads in January.

“Dannielynn has the same playful spirit that her mother had on a set,” Paul Marciano, Creative Director for GUESS, Inc., said in a statement. “She is a second-generation GUESS girl, which makes this campaign a first for us.”

While we’re not so sure it’s wise to put the littlest Birkhead in an ad campaign already, it’s hard to deny that she’s completely adorable in the ads. It got us reminiscing about the voluptuous Smith and all the promise she had before the May-December romances and tabloid drama came into play.

Smith was a Playboy cover girl when GUESS pushed her into superstardom in 1993. The brand casted her to replace German supermodel Claudia Schiffer as the line’s new “all-American” face styled after the likes of Marilyn Monroe and Jane Mansfield.

It was actually her stint with the company that earned her the name Anna Nicole. Born Vicki Lynn Hogan, she took her first husband’s last name and stayed with it while she posed for Playboy.

“Anna Nicole came from GUESS Jeans, Paul Marciano and me and one of his friends, we were sitting around coming up with a stage name, and that’s where that came from,” Smith told Larry King in 2002.

Despite the history with the brand, we’re surprised that Larry Birkhead has opted to push his daughter into his mother’s career. Well, he has an explanation for that.

“Dannielynn has always looked up to her mom’s image and… I think that this is kind of Dannielynn’s way of paying tribute to her mom in her own special way,” he told Good Morning America on Nov. 27.

Do you remember Anna Nicole Smith’s GUESS ads? Do you think Dannielynn should follow in her footsteps?

Did You Know You Can Find Vintage Le Creuset on Etsy?