Have you poured hours and hours into your blog? Ever wonder if your time and effort could be turned into a book? 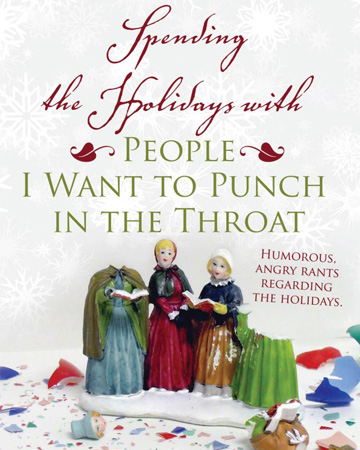 SheKnows: What made you decide to take the concept of your blog and turn it into a book?

Jen: My book is inspired by my blog People I Want to Punch in the Throat. In December 2011, I had 70 followers on my blog. I didn’t have a Facebook page for the blog, I wasn’t on Twitter and I’d never heard of Pinterest. One night, I wrote a post called “Over Achieving Elf on the Shelf Mommies” and promoted it on my personal Facebook account, like I always did. In one week, that post went viral. To date, it’s been viewed 1.3 million times and launched my blog into a whole new realm. I realized that my dream of being paid to write was being handed to me and I needed to figure out a plan fast. I created a Facebook page for the blog and a Twitter account and started sending readers there, hoping to capture as many as I could. Lots of people were one-time readers, but I managed to keep several thousand engaged, and throughout the year since then, I’ve grown my following.

From day one, I heard from many of my readers asking me to write a book. I had always wanted to write a book, but I always imagined it would be a fiction book. I got nervous and realized it would have to be non-fiction, since that’s what I was now known for, but I couldn’t figure out what to write about. A friend suggested the holidays. She wisely said, “Why deviate from what you do best? Write about the holidays and make sure to include that little Elf.” Once she gave me that direction, the pressure was lifted and I got to work. “The Elf on the Shelf” post is in the book, along with a bunch of new essays about the holidays.

SK: How long did the process take you?

Jen: I started thinking about writing a book in January 2012. I am a person who mulls things over in my head for a while before I actually write it down. I did several outlines and lists and bullet points of topics and stories I wanted to cover, but I didn’t sit down and start writing until the summer. I wrote everyday in June and July, and then I edited the book in August. I wanted it to be ready for an October publish date.

SK: Were there costs involved?

Jen: There are some costs involved with self-publishing a book. I think a cover is the most important part of a book. When people don’t know your brand, or anything about you or your book, you need a compelling and interesting cover that will make a reader choose your book. I held a contest on a design site where I offered to pay a flat fee to the winning designer. I had several great entries, and it was so hard to choose, but I’m really happy with the end result, and I feel like it was worth every penny. When you self-publish on Createspace, there are some small fees associated with ISBN numbers and such. So far, I’ve only spent a few hundred dollars on marketing — mostly on free books for reviewers, etc. I haven’t paid to advertise the book or anything like that, and I don’t have plans to at this point. I’m a bit of a guerrilla marketer, so I’ve been accessing every free or cheap avenue to market the book.

SK: Can you tell us a little bit about the book?

SK: Despite its title, it’s a hilarious and heartwarming book. Has it been well received so far?

Jen: I have been overwhelmed with the reception thus far. When I hit publish on the book, I felt sick to my stomach. Sure, I have thousands of fans on Facebook and Twitter who read my blog each day, but this was the first time I was asking someone to pay me to read what I had to say. Up until this point, every time I received a negative comment on my blog, my response was always “Did I ask you to pay me for this?” Now, I wanted people to get out their credit card and purchase my writing. I was terrified no one would buy it, or they would buy it and hate it. So far, I’ve had great reviews left for me on Amazon and my blog, and book sales have been tremendous. I have been an Amazon best seller since the first day, and I expect to hold my position through Christmas. The number one complaint I get is, “It’s too short.” I would rather have a reader complain that I left her wanting more than I bored her to tears for the last three chapters.

SK: How have you incorporated your social media following into your book promotions?

Jen: I have an amazing social media following, and they have been wonderful at helping me promote the book by sharing on their Facebook pages or retweeting me or pinning the book on Pinterest or leaving me reviews on Amazon. Social media is a great way to connect with my readers, and they can tell me what they liked about the book or share their holiday memories with me. I read every review, comment, email and tweet and try to respond as often as I can.

When I was considering self-publishing vs. traditional publishing, I knew that I could be a successful self publisher because I knew that my fans would help me more than a publishing house would. They helped me become a popular blogger, and I knew they could help me become a best seller, too. I’ve been able to find lots of websites and twitter resources for indie writers, and they are always great to help promote indie books. I also have a really super group of fellow bloggers who support me and help spread the word about my book. In fact, recently, a group of them banded together to do a giveaway on the book. They combined forces and promoted one another, along with myself and my book, and they managed to get over 35,000 entries into their giveaway! Bloggers are a book promoter’s best friend. They have a relationship with a particular group of people who tend to think like them and usually have the same tastes as them, etc., so when a blogger gives an endorsement to a product, like a book, it translates into sales every single time.

SK: If a blogger is considering writing his or her own book, what is your first piece of advice?

Jen: My advice would be to write a book based on, or inspired by, your blog, rather than slurping the whole blog into a book. You will do so much better if you include one or two of your best-known pieces, and then, craft a book around them. No matter what you choose to do, it really comes down to getting in front of the computer (or piece of paper if you’re old school) and just start writing. Don’t worry about formatting or programs to use or even a title yet. Get a theme and get writing. Good luck!