Former Obama aide Karine Jean-Pierre, shares her inspiring story of growing up in a family that moved to America to give her a better life and ending up on the forefront of U.S. politics. No matter what your political affiliation, this is one success story that can inspire us all. 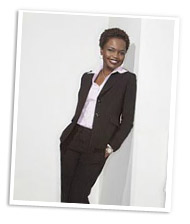 Former White House aide Karine Jean-Pierre, shares her inspiring story of growing up in a family that moved to America to give her a better life and ending up on the forefront of U.S. politics. No matter what your political affiliation, this is one success story that can inspire us all.

Need a little inspiration to start your day? How about a pick-me-up during the negativity that always surrounds a close presidential campaign? We have the perfect interview for you.

Karine Jean-Pierre, named one of The Advocate’s 2011 Forty under 40, first started working for President Barack Obama in 2008 as the southern regional political director in his Chicago headquarters and ultimately became the national deputy battleground states director for the President’s re-election campaign until June. This talented woman in politics has also served as a regional political director at the White House Office of Political Affairs and as White House liaison at the U.S. Department of Labor.

Jean-Pierre is the perfect example of an American success story and will inspire you no matter what side of the political fence you are on.

SheKnows: You had such a great position on the inside of Obama’s political campaign, what surprised you the most about presidential campaigns?

Jean-Pierre: When I took the position at the White House, I knew I would take a pay cut, and I knew it would be a lot of work, but it amazed me just how much work it took. It was seven days a week, 12 hour days. This administration has been so much different than past administrations because of the advancement of social media. You can’t turn off Twitter or Facebook so you are constantly working. It is amazing how much of your time you are really giving up. It’s intense and you are dedicating your life to it, but there is a lot of work to be done, and it’s extremely gratifiying to be a part of the process.

SheKnows: What has been your biggest learning experience in politics?

Jean-Pierre: When you’re young and you get into a career and you are trying to learn the craft and learn it well, it takes you awhile to become confident in it. Once I realized that I was good at developing relationships and strategies I realized “OK, I can do this.”

SheKnows: Do you feel like the political arena is still male-dominated or are females gaining more ground?

Jean-Pierre: We are definitely gaining more ground. Are we where we should be? No. I think there is more work to be done.

I wish more women would run and take on the elected official arena. I’ve read statistics about how many times you have to ask a woman to run before they actually say yes, and it is so much higher than the rate for men. Our voices need to be heard.

We need to get more women out there so we can have more of a voice. We have come a long way, but there is still more to be done.

SheKnows: What about being young and in politics? Do you think that has hindered or helped your success?

Jean-Pierre: There are situations that came up that, looking back, I would have handled differently if I had had the confidence I do now. But I do know I had to build that confidence so it’s all a learning experience.

It’s been great to be young in politics during this administration because Obama really tapped into our world.

SheKnows: You have such a great American success story, what do you feel has been the key to your rapidly rising career?

Jean-Pierre: I give credit to my parents. They are Haitian and immigrated to America. My dad is 70 but still drives a cab, my mom is home health care worker. They came from a country that is impoverished but left to get a better life for their kids. For them, they are so proud of me, and they feel they have reached their dream because of my successes, but without them I wouldn’t be where I am. They told me I could be whatever I wanted to be, do whatever I wanted to do.

I remember in junior high school one of my counselors told me I should be a nurse not a doctor. When I told my mom that she was very angry and told me not to listen to anyone who told me not to live my dream.

They believe in me, and I wouldn’t be where I am without the sacrifices they made to make sure I went to private school and college and grad school. The American dream has come true for them, they’ve gotten to meet the President and First Lady through my work, and it is great to give that to them.

SheKnows: What is your favorite/least favorite thing about an election year?

Jean-Pierre: There is something to an election year when you are a political nerd and watching the numbers and the key states that need to be won and the polling and the Electoral College and trying to figure out strategically what each candidate needs to win. Coupled with that, really talking with folks and watching Twitter feeds and seeing everyone coming together over the issue of voting. I love the numbers game, watching people debate over it and seeing people exercising their right to vote.

My least favortie thing is definitely watching the nastiness of it and how ugly people can get.

SheKnows: What tips would you give to young females looking toward a career in politics?

Jean-Pierre: Stay focused, continue to work hard, sometimes it’s going to feel like it’s hard to break through, but the way you continue to move forward is to form great relationships and cultivate them. Relationships are key.

Know what you are good at and stick to it. Stay on top of it, work hard and take chances. One thing I did was, after going to undergrad and grad school in New York, I took a big chance and moved to D.C. then to North and South Carolina. I wasn’t afraid to take chances and decided that, if it was going to be beneficial to me, then it was OK to make the jump. A lot of women I admire, if you listen to their stories, they will tell you that they just took a chance, and I think that’s something we need to not be afraid of, just take a leap of faith. I honestly believe that’s why I’m here, because I took these chances.

Making money from home
Should you create an online resume?
Bill Rancic talks business and babies

The 8 Best Dinnerware Sets for Every Day of the Week

The Best Extra Wide Safety Gates for Pet-Proofing Your Home