Oops… even celebrities get it wrong sometimes! We’re telling you why Katy Perry and Vanessa Hudgens’ fashions fell short in our weekly feature. Learn from the stars’ sartorial slip ups! 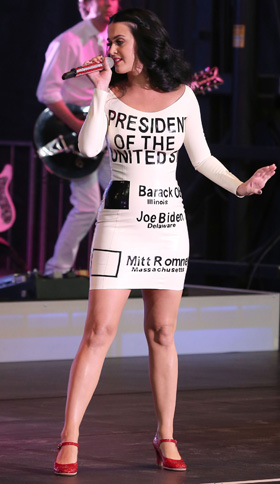 She’s never been the queen of subtlety, huh? When the singer took the stage at the America Forward Grassroots Event in Vegas for President Obama, one could assume that Katy Perry was supporting him. But just in case you weren’t sure, Katy went ahead and dressed as a ballot for her performance, complete with check marks for current president and VP Joe Biden along with Mitt Romney. (Looks like the skirt was too short to include Paul Ryan?)

And obviously, the box for Barack and Biden is filled in, in case you still had any doubts about who the “California Girl” is voting for. It’s great that Katy is passionate about her politics and patriotism, but you’re already performing at the president’s fundraiser. That’s a big statement by itself, so you don’t have to wear your vote on your dress, too.

Human ballot dress aside, what’s with those shoes? The red kitten heel pumps with an ankle strap are the fashion equivalent of a hanging chad: are they high heels or not? We can’t decide.

The final verdict? We usually love Katy’s bold fashion choices, but this dress is a little over the top. Then again, it was her birthday, so we guess we can give her a presidential pardon. 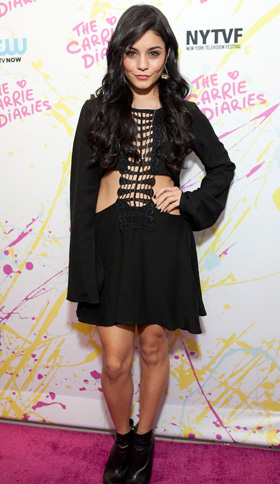 Can someone please call this poor girl a tailor? She’s missing fabric in the middle of her dress and has way too much of it on the sleeves. Vanessa Hudgens stepped out for the premiere of The Carrie Diaries in NYC, where she was supporting her beau Austin Butler who stars on the show.

Cutouts are cool for fall, but the ones on this dress are more like tear outs. The Love & Lemons Moonlight mini looks like two separates barely sewn together! And where she’s lacking coverage in the midriff, she’s drowning in it on her arms. The sleeves on this number are so long, you can’t even see her hands. How is she gonna eat popcorn in this?!