Think fake blood and vampire teeth are only en vogue during the month of October (or at a Twilight premiere)? Think again! We’re chatting with Dr. Gregg Lituchy about the rising trend in vampire veneers and his work with Heidi Klum.

Related story The Beginner's Guide to Applying Your Makeup in the Correct Order
Would you get vampire veneers? 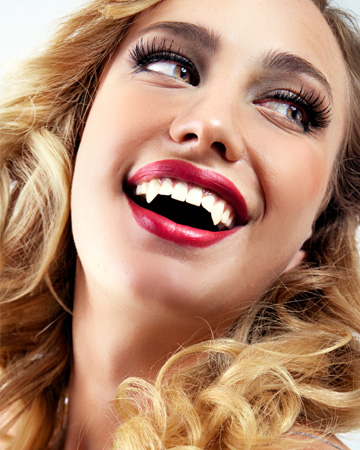 SheKnows: Just in time for Halloween, the vampire trend is hotter than ever! How are people responding to vampire teeth? Are they really taking the plunge and getting fangs?

Dr. Gregg Lituchy: Between True Blood, the Twilight Series and The Vampire Diaries, the vampire trend is hotter than ever. I am finding an increase in the number of patients who are coming in for cosmetic procedures and are asking for their canine teeth to be shaped longer and pointier than in the past due to this [trend].

SheKnows: What are some permanent and non-permanent ways that vampire fans can get in on the action?

Lituchy: Permanent procedures to acquire vampire looking teeth include porcelain veneers and bonding, where the porcelain or composite are shaped in such a way to mimic the look of vampire teeth. A non-permanent procedure involves fabricating removable snap-on costume teeth which fit over one’s natural teeth.

SheKnows: Is there any danger to getting a permanent vampire veneer?

Lituchy: No. Veneers, bonding and snap-on teeth are purely aesthetic, nothing dangerous at all. The bonding as well as the veneers can be re-contoured at a future time to make them look more normal and less vampire. 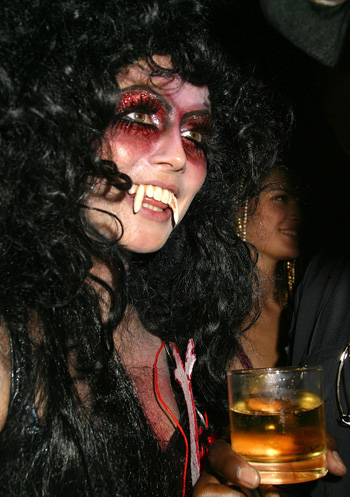 SheKnows: Tell us about your work with Heidi Klum! What have you done to her teeth for past Halloween costumes?

Lituchy: I have been Heidi’s dentist for over a decade and she always loves to throw Halloween parties. Heidi is always very meticulous and detail-oriented about her costume from head to toe including her teeth.

Last year, we made upper and lower fang teeth, which were custom fit to her teeth. We do this by making a mold of her teeth onto which a set of vampire like teeth are fabricated. The fit is quite accurate since they are made from a model of her teeth, and we also do custom color and shading so they blend in seamlessly with her other teeth. For one of her parties where she wanted the teeth to be more “ape-like,” we also added pink acrylic to mimic gum tissue to plump out her upper lip.

SheKnows: Do you see this trend lasting or is it just a passing fad?

Lituchy: I see this trend as hanging around for the next few years while the vampire craze on TV and movies continues.

SheKnows: Any other thoughts on the trend or advice for fans seriously debating changing their teeth?

Lituchy: For fans of the vampire craze who are considering doing this, I say go for it! Life is short, so have some fun with it.