Oops… even celebrities get it wrong sometimes! We’re telling you why Cate Blanchett and Lea Michele’s fashions fell short in our weekly feature. Learn from the stars’ sartorial slip ups! 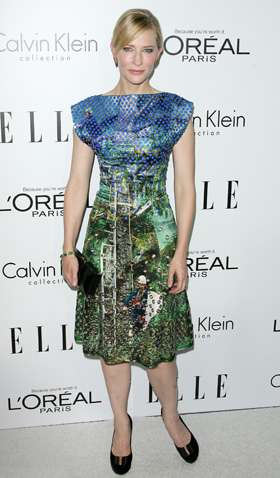 What in the world is going on with Cate Blanchett‘s mess of a dress?! She wore this Proenza Schouler number for ELLE’s 19th Annual Women in Hollywood Awards that left us scratching our head and covering our eyes.

The crazy photo print reminds us of a scrapbooking project gone seriously awry, while the raised studs on the neckline and hemline look like Braille. We’re betting if you were to read this dress, it’d say “please throw me away.”

She topped off her look with Van Cleef & Arpels jewels and a black clutch. Cate usually has great style sense, but we can’t think of anyone who could pull off a dress this busy.

The final verdict? Like we said, there’s no saving this dress. However, it does show off Cate’s amazingly svelte shape, so at least there’s that. 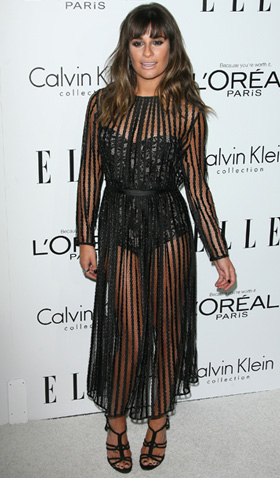 We see London, we see France, we see Lea Michele‘s underpants! Here’s the Glee starlet hitting the white carpet at the very same event. Lea has been amping up her sexy side as of late, but this look just makes us feel uncomfortable.

She chose a Brian Zimmerman see-through dress which she wore over the top of a bustier and hotpants, showing off all of her legs. We get it, Lea… you’re all grown up and you’re so not like your goody two shoes character Rachel Berry, but it’s nice to leave a little to the imagination sometimes.

We suggest you grab a page from fellow attendee Emma Stone’s stylebook and stick to one sheer element, like sleeves.

The final verdict? Lea should stop trying so hard to be a sex symbol. She’s pretty and talented as it is. You don’t need to try and shock us with your risque ensembles. Leave that to Lady Gaga.

This Secret Store Has Popular Staub Cookware (Even the French Oven!) Up to $248 Off