Oops… even celebrities get it wrong sometimes! We’re telling you why Christina Aguilera and Elle Fanning’s fashions fell short in our weekly feature. Learn from the stars’ sartorial slip ups! 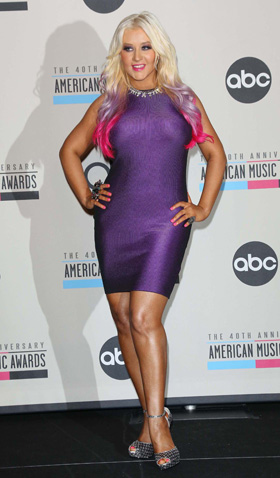 The look Christina Aguilera chose to announce the American Music Awards seems inspired by My Little Pony. Her multicolored mane goes from bleached blonde to lavender to hot pink. Ombre tips are one thing but having three different colors in your hair is out of control, girl. Not even Katy Perry attempts tri-colored tresses!

Xtina also made sure she matched her rainbow hair to her dress and makeup, too, sporting bright purple eyeshadow and hot pink lipstick. When you have crazy colored hair happening, your makeup should be simple. Say it with us: Less is more.

Then there’s her dress. It’s great that Christina is comfortable with her curves, but would it kill her to let them breathe a bit? Skintight doesn’t always equal sexy. And patterned shoes?! Just say no.

The final verdict? Sorry Christina, but we don’t want to taste the rainbow. You looked great when you met Hillary Clinton last week. You should probably just dress like you’re going to hang with Hil every day. 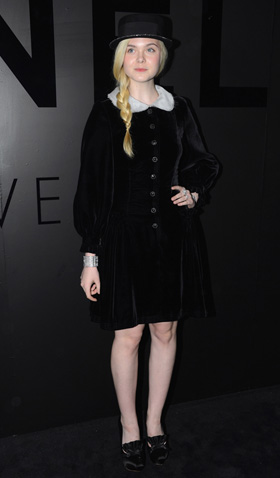 We thought the youngest Fanning sis was headed to Thanksgiving dinner in this Pilgrim-esque ensemble, but she’s actually attending the Chanel Fine Jewelry 80th anniversary party in NYC. Now Elle is totally adorable, but she needs some styling help stat.

We usually love all things Chanel, but this dress by the label is a miss, particularly for someone as young and fresh as Elle. The velvet dress is far too frumpy for a 14-year-old! The hat isn’t helping things either.

Then again, we have to give her props for being invited to a couture party and being dressed by the designer to boot. She clearly has the coolest teenager life ever!

The final verdict? Elle should save this dress for Turkey Day or use it as a Halloween costume, but we do love her fresh-faced glow and side braid.