The penetration of cell phones is so widespread today that even elementary school students can be spotted with smartphones. It’s a different world from when you were growing up. Here’s what you need to know when it comes to kiddos and cell phones. 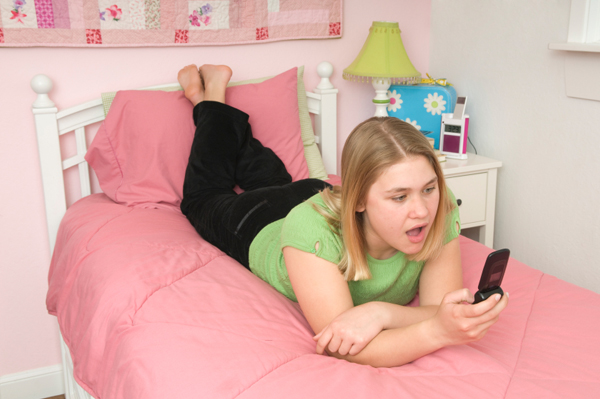 Many cell phones are internet-capable, which means your child will likely want to log into their Facebook page, text friends and Tweet. Make sure they know that everything they put on the internet now will affect them in the future. If they post risque cell phone photos or status updates, they’re on the internet forever, even if they’re taken down from their original source. Viewers can save that information and use it later.

For kids, cell phones are more than just a way to communicate with the outside world — they’re a fashion accessory. Odds are your child is going to want the top-of-the-line model smartphone. If you don’t feel like they’re responsible enough to be careful with a costly device, have them save up the money for it on their own. It’s doubly cool when you have a powerful smartphone that you paid for all by yourself. Plus, it teaches them to have responsibility for their possessions.

On top of being super social, teenagers have the sense that they’re invincible. Combine that with a new driver’s license and you have a recipe for disaster. You’ve heard the story — “Teen sending meaningless texts while driving dies.” It’s not enough to tell your child they could die if they’re not paying attention to the road. If they feel invulnerable, it won’t matter. Just let them know you’ll be extremely disappointed if you see it happening and that you love them and want them to be safe. If all else fails, tug at their heartstrings rather than their rationality.

So maybe your teen has proven that they can’t stay off their phone during school or while driving, but you still want to communicate with them as needed. There are options. Sprint Guardian disables text and talk capability while the user is driving or at a scheduled event like school. Plus, you can keep track of your child’s whereabouts to ensure they’re actually going to the movies like they say they are. Of course, this should only be used as a last resort if your teen has shown they’re having a hard time handling the responsibility of the device.

This TikTok-Viral Cloud Couch is Worth Every Penny—Trust Me, I Own It

4 hrs ago
by Summer Cartwright