If you refer to V*******t as “He Who Must Not Be Named” in casual conversation, you’ll love these Harry Potter-inspired pet names. Whether you have a mammal, reptile or fish, J.K. Rowling has already created the perfect name for your new addition. 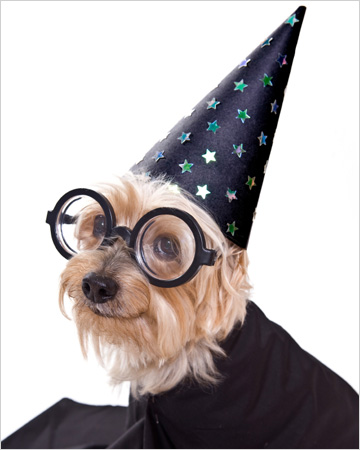 Even the Queen of England’s getting in on the Harry Potter craze, paying tribute to fellow Brit. J.K. Rowling by naming her new Labs after characters in the author’s inspiring seven-book series. Even if you’re a Muggle at heart, you’ll be proud to call out these adorable names at the dog park.

Whether you choose the full version of the name or just use the surname, it may be a bit on the nose to give this moniker to your pup. As all fans know, Lupin was afflicted with lycanthropy (a fancy way to say he was a werewolf). Try this as an ironic name for your pet bunny or cat!

This loyal hippogriff (half horse, half bird) came to Harry’s rescue, but wasn’t so fond of Draco Malfoy. It’s a great name for a parrot or canary who clearly has affections for one owner, but not his or her spouse.

One of Hagrid’s favorite pets, this baby dragon was a lot more adorable than the four beasts from The Goblet of Fire. This is a spot-on name for the big, goofy dog in your life.

Sure, she was a Death Eater, but Bellatrix Lestrange was a lot of fun to read about and even more fun to watch as brought to life by the extraordinary Helena Bonham Carter. It’s also a lot of fun to say! Great for any animal, it can also be used with the names Andromeda and Narcissa (Bellatrix’s sisters) if you just have to keep the whole brood!

Speaking of fun to say, this quirky name, unfamiliar until now to many Americans, is a very appropriate name for any unmanageable-ly coated kitty. If you’re more of a purist, you can always go with Crookshanks the name of Hermione’s fluffy orange tabby.

Who didn’t adore that lovable dope who blossomed into a pretty good wizard after all? A great name for any animal or breed, it’s just right for your loyal and courageous (and maybe a bit silly) sidekick.

Need a name that strikes fear into the heart of potential burglars? These soulless creatures may be the scariest thing about the series — even more so than the Dark Lord himself. Those thieves better practice their Patronus charms!

This handy spell saved our intrepid heroes lives on multiple occasions. Also known as “the summoning charm,” it’s hard to resist the humor in seeing your adoring little pup run eagerly up to your side after you thrust out your wand hand and decry “Accio!”

While the names of some of the other spirits who haunt Hogwarts are a bit gruesome (Nearly Headless Nick, The Bloody Baron), Myrtle is a great name for your new princess. Bonus points if she’s a hound.

They say beauty is in the eye of the beholder. If you seem to be the only one who thinks your little sweetie is the cutest pet on the block, try naming him after this goblin. They may not be cute, but they certainly are clever!

In her seven novels, Rowling created many, many unforgettable characters. So many, we couldn’t list them all. If you don’t find the perfect name in this list, pick up the first book and keep reading until you do!