Oops… even celebrities get it wrong sometimes! We’re telling you why Kim Kardashian and Heather Thomson’s fashions fell short in our weekly feature. Learn from the stars’ sartorial slip ups! 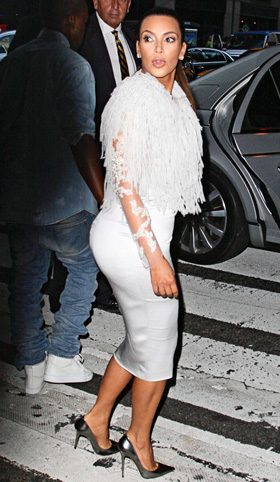 Kim Kardashian‘s style has definitely transformed since she started dating Kanye West, but we’re not sure if it’s an upgrade. The girl who once constantly wore colorful Herve Leger bandage dresses now seems to favor neutrals.

Kim K rocked this fringed white dress during New York Fashion Week to the Marchesa show, where she sat front row with her designing beau. Someone needs to tell Kim that white is not slimming, and when you’re famous for your larger than life booty, wearing a super-tight white dress isn’t so figure flattering.

The E! reality star also used to play up her cleavage, but her décolletage is all covered up in this fringed frock with lace sleeves. The top of the dress looks like a knitting project gone awry, with yarn hanging all over.

The final verdict? We hear Kanye has been giving Kim styling help lately, but does she really wanna take fashion pointers from a guy wearing denim on denim? Just asking. 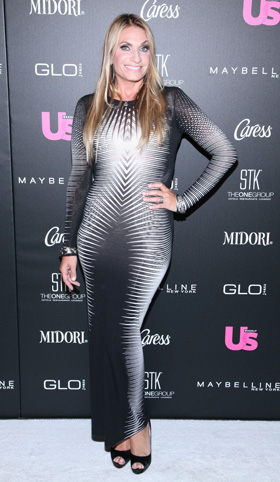 What’s black and white and ugly all over? Real Housewife Heather Thomson was named one of Us Weekly‘s Most Stylish New Yorkers, but you’d never know it by the disaster she wore for the mag’s party last night at STK in NYC. What the fug?!

According to her Twitter, this dress is by a brand called Evil, and we can see why. The black and white gown reminds us of a skeleton. And for a woman who makes her living selling slimming shapewear, we can’t imagine why she chose this getup.

The black and white contrasting gown creates the wrong kind of optical illusion, making her silhouette look wide. We thought if we stared at it long enough, it might morph into something different, but no such luck.

The final verdict? When wearing colorblocked dresses or contrasting hues, look for pieces that have the darkest color on the outside and lighter ones inside to flatter your figure.