Oops… even celebrities get it wrong sometimes! We’re telling you why Rita Ora and Tara Reid’s fashions fell short in our weekly feature. Learn from the celebrities’ fashion mistakes! 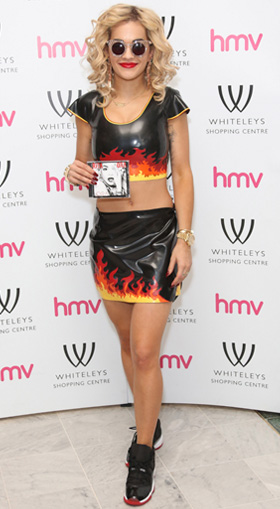 In case you don’t know, Rita Ora is a British singer. She’s Jay-Z’s newest protege and is supposed to be the next Rihanna of sorts. And considering she wore this flaming fashion disaster, we can certainly see the comparison between the two musicians beyond their vocals.

Midriff-baring outfits are trendy right now, but this PVC outfit is a fiery mess. The material looks cheap and tacky and matching flames are so not cool.

To add fuel to the fugly flame, Rita paired her ensemble with a pair of hightop sneakers and huge earrings. Someone turn the hose on her stylist!

The final verdict? This whole outfit can’t be saved. Burn the whole thing and start over, babe! 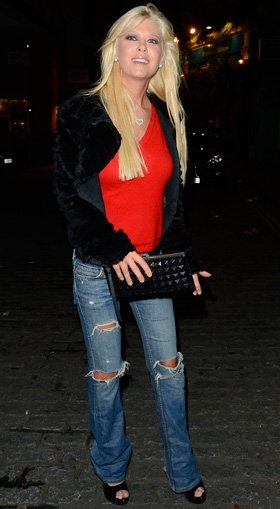 Poor Tara Reid… the American Pie actress seems to be stuck in a time warp as she leaves Zuma restaurant in London. Listen, sweetie, it’s not 1999 so we don’t really understand why you’re wearing ripped flared jeans and a babydoll tee.

And what about those messy blonde extensions? There are so many natural looking options these days that we really can’t understand why she’s rocking these blunt, bleached out hair pieces.

Also, Zuma is an upscale restaurant, Tara. You’re not going to happy hour at TGI Friday’s. Dress it up a bit!

The final verdict? We know there was an American Pie sequel, but it’s time for Tara to update her style already. Then again, at least her ladyparts are all covered up this time, so we suppose that’s progress of some sort.