In need of a tune-up? Hit a high note with your next vacation by booking a stay at a hotel that caters to music lovers.

Where to stay and play

In need of a tune-up? Hit a high note with your next vacation by booking a stay at a hotel that caters to music lovers.

Not only is the W Austin located in the live music capital of the world, but it also shares space with the famed Austin City Limits venue, ACL Live at The Moody Theater, that’s hosted talent like Coldplay and John Legend. Once a month, this Texas hotel showcases local musicians in the Living Room Live series with an all-night happy hour. In the Records Room, take your pick of 8,000 vinyl records to play on a vintage McIntosh Sound System. Or, spend time appreciating the hotel’s museum-like exhibit of photographs snapped by ACL photographer Scott Newton. As if that weren’t enough, you can book the “Over the Hills and Far Away” treatment at AWAY Spa, which is a nod to Led Zeppelin front man and Austin resident Robert Plant. Oh, and did I mention that some of the industry’s biggest stars (ahem, Kanye West) have been spotted at the W Austin during South by Southwest? 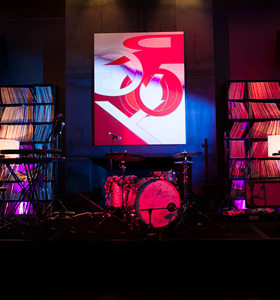 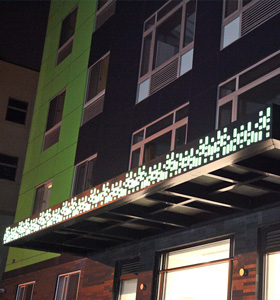 New on the scene is Hotel BPM, a 76-room boutique hotel by hip-hop DJ Bijal in the heart of Brooklyn near the Brooklyn Bridge. Playing off of the New York City borough’s hipster charm, Hotel BPM (stands for “beats per minute”) streams selected tracks from Bijal’s lineup through its public areas. Book a stay through the hotel’s website, and you can even request a song to be played in your room during your visit. Live DJ performances are hosted in the lobby on Friday and Saturday nights with the recorded sets available for download in the month.

Sunset Marquis‘ celebrity guest list is full of the music industry’s biggest names — The Rolling Stones, Jimi Hendrix, U2 and more — many of whom have left proof of their stays in the form of signed photos and guitars. The West Hollywood, California, hotel, full of rock legends and lore, has undergone several expansions and renovations over the years to become one of the area’s most luxurious spots. Get in on the action with the “Rock Then Roll” package that includes, among other things, a stay in a deluxe villa, an EG-1 Custom or Vintage guitar and drinks at RESTAURANT Bar, plus all-access VIP passes that grant free entrance to Hollywood’s top bars like the Viper Room and Whisky a Go-Go. 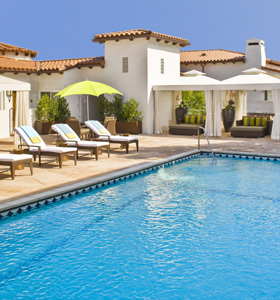 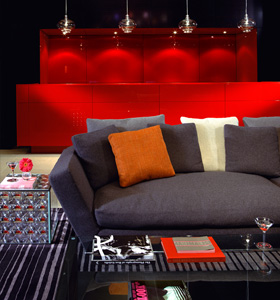 Though most of us want to forget about the era’s terrible fashion choices, it’s impossible to deny the influence 1990s grunge had on music. Hotel Max in Seattle pays homage to the genre’s most famous players in “The Nirvana Experience.” Stay on the 5th floor among larger-than-life photographs of Nirvana and other Seattle bands — snapped by the grunge era’s most iconic rock photographer, Charles Peterson — then check out the Nirvana: Taking Punk to the Masses exhibit at EMP, where you’ll also enjoy a $25 gift card to its store. Get a signed copy of Peterson’s book and two patches from Sub Pop, Seattle’s most recognizable indie record label, and kick back in your room that’s stocked with a six-pack of local beer.

It’s only two hours from New York City, but Winvian‘s 113 acres of meadows and woodlands in Connecticut’s Litchfield Hills feels worlds away. The whimsical getaway is home to 18 luxury cottages, one of which is aptly named “Music” and equipped with oversized instruments that you can play. Strong colors and bold design punctuate the quaint cottage and elements evoke various instruments — like an eye-catching piano mosaic in the main room and windows that symbolize musical notes. A stay at Winvian also means access to a tranquil spa and restaurant that sources many of its ingredients from an on-site garden.

Plan your next escape 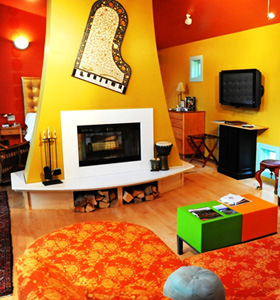