Smoking hot television superstar, Sofia Vergara, spills all — her Emmy nomination, favorite red carpet moment and what’s next for her on Modern Family. 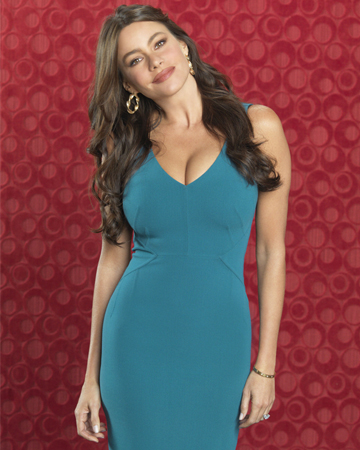 As we sit down in Sofia‘s closet, which is covered with racks of her clothing line, we can’t help but stare at her perfect, well… everything — her body, luscious locks, red lips, sexy accent… we could go on.

Four weeks into filming the fourth season of Modern Family, this Emmy nominee can’t help but gush about her hit show, style and her favorite Vera Wang dress.

SheKnows: How would you describe your personal style?

Vergara: I think I’ve changed throughout my life because with different ages, you have to adjust. Before, I used to be in the Latin market and was sexier. Now, if I show a little bit of leg, I try to not show too much cleavage, and vice versa. But I try to use lots of color — a woman shouldn’t be afraid of color. (But I love black too). But I feel my style is whatever makes me look good!

SheKnows: Who are your favorite designers?

Vergara: My favorite designers are those that have always made me feel sexy — for example, I love Dolce & Gabbana because their dresses fit me very easy [well]. I like Valentino because it’s all so classic. I love Diane von Furstenberg — she’s very wearable for all women. And whenever I want to go crazy, I like Cavalli!

Vergara: I’m always very happy with my results because I have a very good stylist. I usually pick the dress I feel more comfortable in. The first time I was on a big red carpet, I wore a Carolina Herrera, and I loved last year’s Vera Wang — the coral dress.

SheKnows: We love Sofia by Sofia Vergara for Kmart! What are your favorite pieces from the line?

Vergara: Everything! I’m involved in the creative part of the designs. The jeans and the leggings are my favorite! My friends beg me to have them. 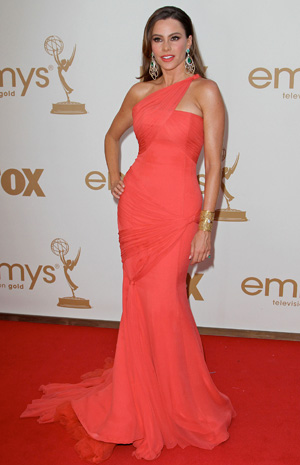 SheKnows: Congratulations on your Emmy nomination for Modern Family! What’s your favorite part about playing your character, Gloria?

Vergara: I can put a lot of my Latin culture into the character to make it more real, so it’s a lot of fun to play.

SheKnows: What’s next for Gloria?

Vergara: She is going to be pregnant this whole season, so it’s been very interesting, but I think it’s going to be a fun season!

Don’t forget to catch Sofia Vergara in the season premiere of Modern Family Wednesday, Sept. 26 at 9 p.m. EST on ABC.

Sofia Vergara shows off her huge… bling
Emmy-nominee Sofia Vergara and other celeb Cancers
What popular TV actress brings in the biggest bank?