We help you understand the major differences between two of the three most popular mobile operating systems on the market: Apple’s iOS and Google’s Android. 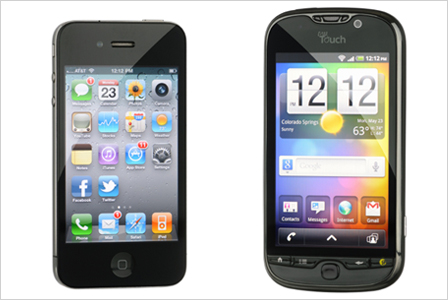 The question “iPhone or Droid” should really be redefined as “iOS or Android.” The comparison comes down to two different mobile operating systems. Apple’s iOS is exclusive to Apple’s iPhone whereas Google’s Android is available on a whopping 42 phones through a variety of manufacturers. In this guide, we’ll help you understand the basics of each operating system so you can make a more informed choice about which of the two major smartphone operating systems is best for you.

Are you into open source?

This is perhaps the biggest and most important difference between Android and iOS. Android was developed as part of the Open Handset Alliance, a collaboration of 84 electronics firms — think LG and Samsung — to create a mobile operating system with consistent standards. Android is credited to Google since they funded the development of the mobile operating system. (They also bought the rights to Android in 2005.)

As such, Android is a mobile operating software that multiple manufacturers can work with in terms of design and functionality. This is why you see a huge selection of phones from companies like LG, HTC and Samsung. Each manufacturer can interpret Android in its own way and then bring this design and functionality tweak to their phones. The fact that Android is designed to work with a variety of manufacturers is great if you want to play around with different phones to figure out which type of smartphone you like best.

Are you into flexible apps?

This is a question more geared for those with greater technological ambitions. Downloadable applications otherwise known as “apps” are one of the coolest features of both Android and iOS. However, Apple keeps a tight rein on its apps — with stricter guidelines for both programs and developers. Even with these restrictions, Apple does have more apps available for download. However, it may not come down to quantity for you — it may just be the principle of an open market. And if you are into the nitty-gritty of your phone’s operating system, you can actually get quite custom with Android. If not, you will still find the same styles of apps available for download for both operating systems.

Are you into simple?

Google’s Android can be very overwhelming for consumers. especially when compared to Apple’s iOS. Apple focuses on their energy into one operating system on one phone, then they work their magic in the user experience department. Apple has a following for a reason: People truly enjoy interacting with their iPhones. This is not to imply that Android users are miserable. It is just a different style of experience. If you want simple, no hassle and intuitive, you’ll likely want to focus on Apple. If you are more creative and like the option of having options, then Android is your best bet.

Always in charge: How to keep your mobile devices charged up
Instagram finally available for Android
Is your child a smartphone orphan? Balancing work and family