If you have a baby on the way, one of the things you’ll likely be thinking about is decorating a nursery. If you’re not sure where to start, we’re here to help. We enlisted the help of HGTV’s Design Star judge Genevieve Gorder to share some of her top tips for creating the ultimate space for your new bundle of joy.

Related story Get Gigi Hadid's Style in Your Baby's Nursery: Here's What You Can Buy Now 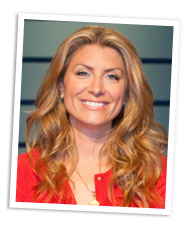 If you have a baby on the way, one of the things you’ll likely be thinking about is decorating a nursery. If you’re not sure where to start, we’re here to help. We enlisted the help of HGTV’s Design Star judge Genevieve Gorder to share some of her top tips for creating the ultimate space for your new bundle of joy.

Gorder suggests planning your nursery several months in advance so you can roll it out gradually, rather than rushing to get things done. You’ll also want to take the overall design of your space into consideration before making any decisions. “You want to make sure the nursery doesn’t feel like a complete departure from the rest of the house,” she notes. “The color palette should be as elegant as you want it to be.” This means you aren’t tied to cotton candy pink or pastel blue; in fact steer clear of nursery stereotypes. One of her biggest pieces of nursery decor advice is to keep things gender-neutral. “Never design for a girl or a boy. They don’t even know they’re a girl or a boy yet,” she says.

Keep it simple, but don’t dumb it down, says Gorder of her design philosophy when it comes to nurseries. Sure, they’re babies but as she notes, they don’t know who Bugs Bunny or Dora the Explorer are yet so you don’t have to feel tied to standard “kid stuff” when it comes to decor.

Don’t get tied to trends

While it’s a good idea to check out what’s going on in the world of nurseries, Gorder advises against focusing too much on trends. She tries to steer clear of going too trendy and, instead, suggests focusing more on what you love. “I don’t really follow trends too closely. I borrow from what’s happening currently, but don’t rely too heavily on trends because I don’t want the room to feel dated in a year,” she explains.

A few of the things that are happening right now in terms of nursery decor include rich texture and color, says Gorder. “In general we’re looking at a lot of embroidery, woven pieces, ancient patterns and lots of color,” she tells us. “Things are more colorful now than they were two years ago. We’re seeing lots of bold colors like turquoise, gold, pinks and yellows,” she notes. “Yellow is on fire right now; heavy colors are playing hard.” 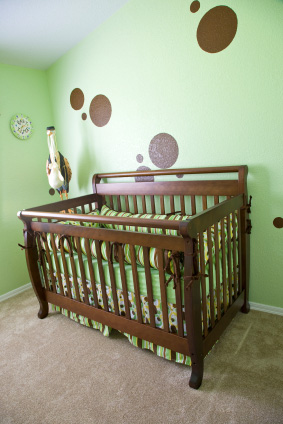 The first things new babies stare at, other than their parents, are going to be in this room. That means larger, more graphic shapes are best. Simple shapes are perfect for babies since they can’t really discern what they’re seeing for a couple of months. Gorder cites the wallpaper she used recently in Rosie Pope’s nursery as an example. “I fell in love with that wallpaper,” she says, which is white with a series of repeating graphic shapes (handstamped for an even cooler effect). “Go for something with really simple shapes with a lot of negative space.” Keeping things simple yet chic also allows for easy updates as your child gets older, she adds. You want the space to be able to grow with your kids.

“There’s so much time in life to have crushes on fads, when they’re babies they’re so innocent so we want to celebrate the sweetest things in design, whether it’s a boy or a girl,” explains Gorder. “You want soft fabrics, embroidery, some pops of color but nothing too bright because they’re just starting to see color.” 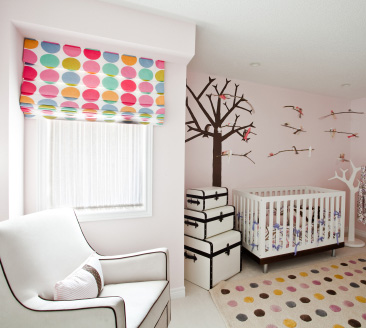 “I feel like there always needs to be a sense of pattern in the room,” says Gorder. “This is something I’ve even done on ceilings.” She suggests several black silhouettes of animals as fun ceiling graphics because babies are always on their backs.

A rocking chair glider is another nursery must, but be choosy about which one you buy. “99 percent are ugly so spend some time and choose carefully because there are starting to be more urban, tailored options,” Gorder notes. “You’re going to be spending a lot of time in it so make sure it’s one that works for you.”

She also suggests adding other forms of visual stimulation in the form of mobiles or other items you can hang from the walls or ceilings. Just make sure anything you hang is soft to ensure safety. “These items add movement to the room, which is important because they stare for hours so you need to give them movement,” she says.

Gorder suggests looking for something unique at either museum or gallery gift shops or perusing Etsy for something out of the ordinary as a way to add even more interest to the room.

Think, too, about finding the best fabrics you can. “Everything that touches their skin needs to be soft,” Gorder advises. Organic cotton is a great option for bedding, blankets and towels.