When most people think of New York City, beaches aren’t the first thing to come to mind. But there are great options for beach bums across the city — all are accessible by public transportation. 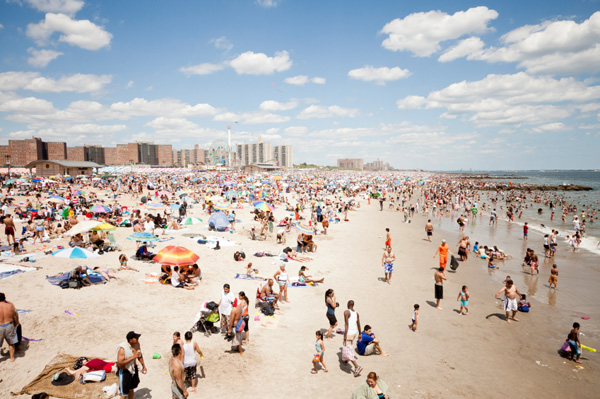 With the heat wave hitting the country, we could all use a few swimming holes in which to cool off. If you’re in New York, don’t forget that the city is right on the Atlantic and offers a surprising number of fun beaches for the whole family. Most of the beaches are about an hour by subway from Manhattan.

More free things to do in NYC this summer >>

Perhaps the most iconic New York City beach (with one of the most famous boardwalks in the country), Coney Island is a quintessential New York experience. The huge stretch of beach, which leads into Russian-dominated Brighton Beach, is a perennial favorite during the summer with fireworks shows every Friday night and all the attractions of the boardwalk, including the Cyclone roller coaster, Wonder Wheel, aquarium, and Nathan’s famous hot dogs.

Get there: Take the D, Q, N, or F subway to Stillwell Avenue (the last stop on the Brooklyn-bound trains).

The new favorite beach destination of New York’s coolest hipsters, Jacob Riis beach at Fort Tilden National Park is perhaps the most pristine, as well as the hardest to get to, of the city beaches. A former military fort on Rockaway Peninsula, today it feels like an oasis far from the hustle and bustle of the city. These days word has gotten out (The New York Times just called it the Queens Riviera), so it’s not as quiet as it used to be, but it’s still far less hectic than some of the more easily accessible options.

Get there: Driving is the easiest option (it’s $10 per car), and many opt to bike. There are two shuttle buses that operate on weekends from Williamsburg — for $6 each way Alexis Van Lines picks up at N. Seventh and Bedford Avenue every hour starting at 10 a.m. The other option is the $10 each way Rockabus, which departs every two hours between 10 a.m. and 6 p.m. from Union and Meeker. Finally, you can also take a lovely one-hour ferry ride from downtown Manhattan for $30 round-trip.

The only beach in the Bronx, Orchard Beach was originally constructed by Robert Moses to be the “Riviera of New York.” Located in Pelham Bay Park, the mile-long beach offers a peaceful swimming environment as well as picnic areas, playgrounds, snack stands and various sports courts.

Check out the 10 best beaches for families >>

Between Fort Tilden and the beaches of Long Island, Rockaway is a lively beach with a diverse crowd. Nicknamed “Rocapulco,” the beautiful, sandy beach is a favorite spot for surfers, hipsters and families. Although lifeguards are present, be careful of the famously strong riptides. In recent years, a number of trendy and tasty food options have flocked to the boardwalk, making it a gourmet hot spot as well.

Get there: Take the A to Broad Channel then the shuttle train. Avoid driving as parking can be a nightmare.