Public transit is great for several reasons. You don’t have to take your car, stress about where to park, plus by not driving you’re making a more eco-conscious transit choice. But riding the subway or sitting on the bus or train does come with its own set of frustrations. We share a few of our pet peeves when it comes to commuting without the car.

Related story These Reusable Silicone Bags With Over 22,000 Reviews Are a Must-Have for Back-to-School & Shoppers Are Buying Them in Droves 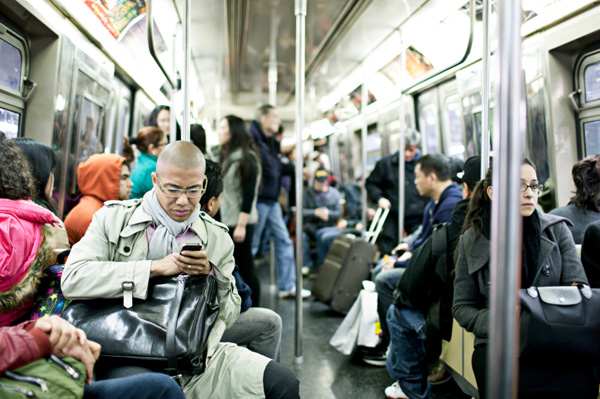 If you’ve riden the bus or subway recently, chances are you’ve run into one of these no-no’s.

Crowded buses make exiting difficult, and the process gets that much harder when there are multiple bodies standing in front of the doors. We shouldn’t have to push by you in order get off. If you aren’t getting off, you shouldn’t be standing right next to the door. We understand you don’t want to miss your stop either, but if we all sat or stood away from the door (and yes, this means sometimes standing at the back of the vehicle), there would be much less chaos near the exit, allowing everyone to get off when they need to.

Most of us get on the bus or train with bags — laptop bags, grocery bags, backpacks — but it’s how you hold those bags that can become a problem for other riders. Backpacks, especially, create problems when worn on your back. They take up a lot more space when you don’t take them off, and there’s a lot more potential for hitting other riders with your backpack as you push past them. Do everyone else a favor and take your bag off. You can hold it by your side until you get off.

It would be great to have enough space on the bus to spread out and not have to share, but for the most part, especially during peak times (morning and late afternoon commute), there are enough people getting on and off that you’re going to have to share. Move over, hold your bag in your lap (don’t leave it on the seat next to you in hopes that no one will sit there) and get up for pregnant women and elderly riders. It’s common courtesy and just makes the ride easier for everyone.

Talking on the bus or train isn’t the issue; it’s talking on the bus or train like you’re in your living room rather than a public space that’s the issue. By all means take that phone call, but do keep in mind you’re on the bus, and it’s very likely that no one else on the bus wants to hear about the guy you picked up last night, or what you’re going to buy at the mall. Keep conversations on transit to a minimum or at least at a respectable volume so other riders don’t have to feel like they’re (reluctantly) part of the discussion.

You can be as messy as you want at home. Leave wrappers on the seats in your own kitchen, not on public transit. If you have to eat a burger and fries on the bus (and we really wish you wouldn’t due to the greasy smell it leaves behind), at least have the decency to pick up after yourself when you leave the bus. Other riders don’t want to have to move the remnants of your lunch off the seat before they sit down.

What are your biggest public transit pet peeves? Share in the comments below!

More about getting around