Oops… even celebrities get it wrong sometimes! We’re telling you why Justin Bieber and Leighton Meester’s fashions fell short in our weekly feature. Learn from the stars’ sartorial slip ups! 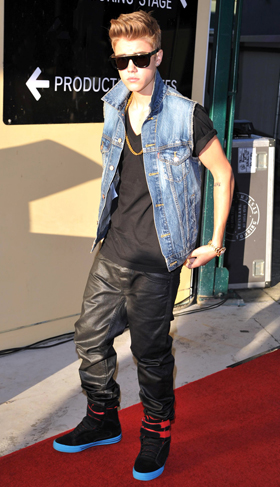 Let’s all give a warm welcome to Justin Bieber as our very first male Fashion Fail! The Biebs is all grown up and he really wants us to know it. When he hit a red carpet in Sydney, Justin went for an ’80s-inspired, denim-on-leather look. Check out his jean jacket, baggy leather pants and hightop sneakers.

Although Justin left his usual accessory, girlfriend Selena Gomez, home for this particular appearance, he did add a gold chain and stunner shades to his ensemble.

We’re not immune to Bieber fever and Justin is a total cutie, but this fashion doesn’t work for him. Leather pants should not be baggy and they should never be tucked into sneakers.

The final verdict? We love Justin’s new mature musical sound (Boyfriend, anyone?), but he could use some styling help. Leather pants should always be tailored, and they’d look more chic with boots or loafers. 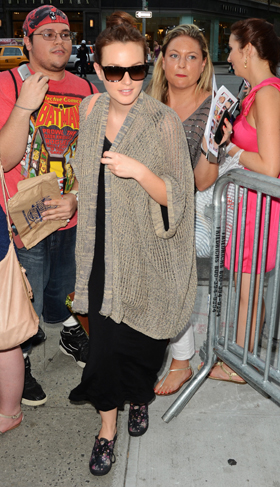 Hey, how did a homeless woman manage to sneak into the NYC premiere of Batman: The Dark Knight Rises? That was our first thought when we saw this shot, but it turns out this walking fashion fail is actually a Gossip Girl starlet! What would her fashionista character, Blair Waldorf, say about Leighton’s hobo lady look?

We know even celebrities like to go casual and comfortable from time to time, but a major movie premiere is so not the place to slack in the fashion department. The giant tan sweater reminds us of a Snuggie, and just like Justin, Leighton’s footwear is also all wrong: The floral print kicks don’t work with a dress.

The final verdict? You don’t always have to wear a couture gown, but there’s a way to dress casually while still looking cute and camera-ready. She would have looked great in a pair of colored jeans or a sundress with wedges or flats. Leighton should save this look for when she’s heading to the matinee solo, and not for an A-list premiere.

How to get that Hollywood glow

The Hollywood glow, found on the red carpet at every award show, can be done by everyday women too. Watch as the SheKnows.com celebrity makeup artist, Allison Pynn, demystifies the secret to this well-known Hollywood trick.