We’re batty for Batman this week, so we’re taking Friday’s Fashion Obsessions to the red carpet premiere of The Dark Knight Rises to show you why Anne Hathaway and Marion Cotillard’s beautiful celebrity styles made us do a double take this week! 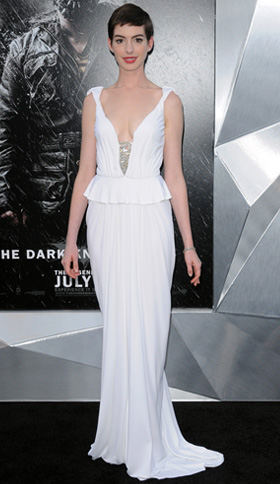 I’ll start this off by telling you that I’m not digging Anne‘s new ‘do. I’m a huge fan of the actress — really, who isn’t? — but I just don’t think the short boy cut is doing anything for her. Now before I digress too much, let’s tie this point into the look in question! You see, a part of the reason why I love this dress so much is that it brings Anne’s entire look back to a very sweet, feminine zone that her hair sort of strays from.

The actress, who plays Catwoman in The Dark Knight Rises, showed off her girly side in this plunging white Prabal Gurung gown at the film’s NYC premiere, and I’m loving how simple yet gorgeous this gown is. From the subtle peplum at the waist to the eye-catching jewels near the bust, to the on-trend white, this dress is an all-around winner. 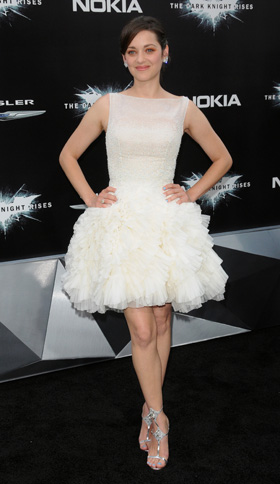 Maybe it’s her French roots or maybe it’s her gorgeous style, but whatever it is, I’m obsessed with Marion Cotillard and her je ne sais quoi. The actress, who plays Miranda in The Dark Knight Rises, looked like a dream in this flirty Dior dress at the film’s NYC premiere.

Marion looks like the grownup version of an adorable ballerina with the floaty skirt and sparkly bodice of this dress, and you can tell she’s in fashion heaven by the way she holds herself in this number. Working our way onto her accessories, I’m sort of drooling over her fun strappy sandals and the très chic sky blue she’s sporting on her nails.

The final verdict? Enough said. I want this in my closet… like now!

Watch: How to get that Hollywood glow

The Hollywood glow, found on the red carpet at every award show, can be done by everyday women too. Watch as the SheKnows.com celebrity makeup artist, Allison Pynn, demystifies the secret to this well-known Hollywood trick.