Did you know that one in three Americans will be involved in an alcohol related auto accident in their lifetime? These numbers are what fuel the Walk Like MADD campaign. The purpose of this charity walk is to prevent drunk drivers from ever even hitting the road. So it’s time to strap on your favorite walking shoes and …well…Walk Like MADD! 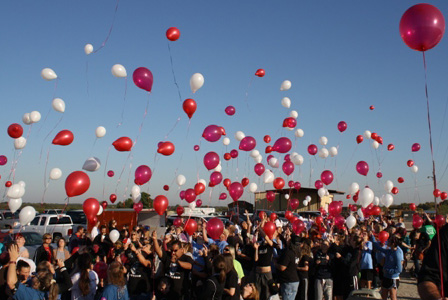 In 1980, 13-year-old Cari Lightner was walking with a friend to a church carnival when she was fatally struck by a car. A few days after the accident, Cari’s mother, Candace Lightner, found out that the driver was not only drunk, but that this accident was his fifth drunk-driving offense in four years. Not only that, but at the time of the crash that killed her daughter, he was out on bail from a previous drunk-driving offense! When Candace was told that the man would likely face little to no jail time for his crime, she decided to form MADD to make sure no other parent suffered the same loss she did and swore to make sure that stricter laws were put in place to keep people like the man that took her daughter’s life off the streets. Lightner eventually joined forces with Cindi Lamb. Cindi’s daughter, Laura, became the nation’s youngest quadriplegic (at only five months old) after a car accident caused by a drunk driver. Laura lived seven short, medically difficult years before she succumbed to a seizure that left her brain dead as a result of her extensive injuries. Together, the two formed an organization that continues to bring the number of drunk-driving-related deaths down and keep drunk drivers off the road.

It may be hard to believe, but every 50 minutes someone’s life is tragically taken from a drunk-driving crash. Mothers Against Drunk Driving, or MADD, is a social activist group formed with the purpose of raising awareness about the dangers and frequency of drunk driving. MADD’s mission is also to pass legislation to increase the severity of the punishment for both first-time and repeat drunk drivers. The organization also provides aid to victims and survivors of accidents caused by individuals under the influence of drugs or alcohol.

In their more than 30 years of existence MADD has grown immensely, and their accomplishments have increased as well including the formation of the Presidential Commission on Drunk Driving. In 1982 Ronald Reagan formed the commission and enacted a bill that awarded federal highway funds to states taking action against drunk driving. MADD also supports legislation that requires judges to make ignition interlock devices part of the sentence for both repeat and first-time drunk-driving offenders and the development of vehicles that do not allow drivers to operate the vehicle with a blood-alcohol concentration higher than 0.8 percent.

If you were ever wondering where the drinking age of 21 came from, you can partially thank MADD for that as their campaign was an integral part of the ruling. The organization also provides resources for victims of drunk-driving accidents and helps inform these people about their rights regarding compensation for financial issues stemming from these tragic accidents. Thanks to these initiatives, drunk-driving fatalities in the U.S. have nearly been cut in half since MADD was founded.

Walk Like MADD is a series of annual walks to help raise funds for the organization. The money raised will go toward resources for victims like legal aid, equipment for police officers to better detect drunk drivers, education programs, and many other necessary programs to help stop the epidemic of drunk driving.

Sign up for a walk and learn more about MADD here.