One-night stands and travel go hand-in-hand, according to a new survey that reveals more than 40 percent of British women under 30 have had a one-night stand on holiday. The poll, which explored that nation’s sexual habits, found that those on vacation are more likely to have casual sex abroad than when they’re at home. 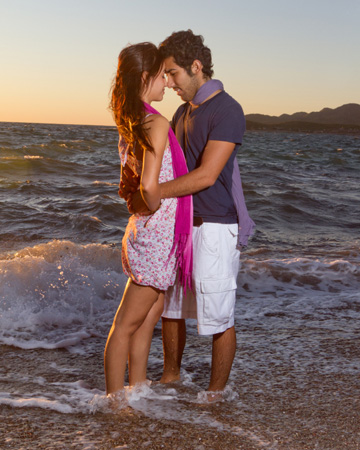 The survey’s findings were revealed in a poll for dating website MissTravel.com, which asked its 30,000 female British members 10 questions about their sexual habits during their summer holidays. To get some insight into the statistics we turned to April Masini, relationship and dating expert behind the AskApril.com advice column and author of four books on dating.

So why are so many people getting it on while they’re away? “Travel and vacations take people out of their normal routines,” explains Masini. “They get to see different things and feel differently. Shedding their everyday skin lets them feel like lots of things are possible, including sex.”

Vacations also relax us and take us out of our usual element. We might even feel a little sexier than we do on a daily basis, i.e., carpooling, sitting at a desk and defrosting frozen dinners. “It should come as no surprise to anyone that sex, including one-night stands, is more of a possibility when you’re feeling less like yourself,” Masini notes.

Having a one-night stand while on vacation also ensures discretion, which can be an incentive. If no one will know or find out about it, you may be more likely to indulge in vacation sex. “People attach shame and irresponsibility to one-night stands, especially to women who chose to have sex with strangers,” explains Masini. “If nobody is going to find out about the one-night stand, many women decide it’s OK to do because they won’t be judged or shamed. They won’t get a reputation as loose or cheap. Nobody will know.”

We’re all so busy — electronics and technology allow us to multitask and be on call almost 24/7. When we’re on vacation, we don’t have an Internet signal or we purposefully leave our laptops and iPads at home. Suddenly, there’s time, which can lead to possibility, says Masini. “You’re on a beach, in the sun, drinking your second mojito and the idea of a one-night stand doesn’t seem like the punch line to a joke anymore. It seems like a real possibility because you’re not under deadline, expected in three places at once, or being texted, dialed and emailed around the clock,” she explains. “The one-night stand is a possibility on vacation because you have the time for it.”

Just go for it — within reason

Obviously, health is a concern when you’re having sex with someone you know nothing about and will probably never see again. “People lie and if you’ve just met them, you won’t have much to go on to even figure out if they’re a chronic liar or not. So consider your health with one-night stands on a holiday in a place far from home,” stresses Masini. But if a one-night stand is on your bucket list, or just something that happens while you’re away, as long as you’re being safe and using all the right protection, vacation is probably the best place to engage in a little frisky fun.

How to travel with a friend — and not fight
Frequent Flier: Top 10 reasons to visit Belize
Tips for finding the cheapest flights