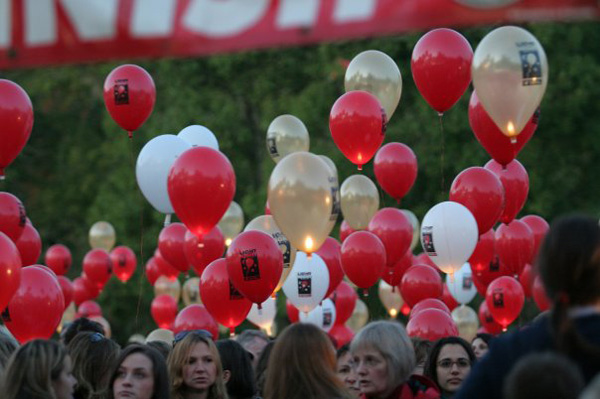 The Leukemia & Lymphoma Society strives to help blood cancer patients live longer, better lives. They are committed to finding a cure for all types of blood cancers, including: leukemia, lymphoma, and myeloma. Thanks to its major fundraising campaigns, Team in Training and Light the Night Walk, LLS has raised more than $750 million in research funding since 1954. This dedication to advancing cancer treatment has led to a five-year survival rate for people with leukemia that has nearly quadrupled since the conception of the organization, and Hodgkin’s lymphoma is now recognized as one of the most curable forms of cancer.

In 1949, Rudolph and Antoinette de Villiers, parents of a leukemia patient, started the Leukemia & Lymphoma Society five years after their son, Robert, succumbed to leukemia. Frustrated by the lack of treatments for the disease that took their son, the grieving parents started the Robert Roessler de Villiers Foundation to help improve fundraising and education for leukemia with the hope that someday no parent will have to face the tragedy of losing a child to blood cancer.

The Leukemia & Lymphoma Society has witnessed immense progress in the fight against blood cancers in the many years since its conception. The society saw the first successful bone marrow transplant in the 1970s and has supported progress in the drugs used to treat leukemia and lymphoma, as well as developing an understanding about what causes these diseases and how to prevent them before they attack the body.

Light the Night Walk involves communities coming together across the United States and Canada to raise funds for the Leukemia & Lymphoma Society to continue its success. Each event is an inspiring, leisurely evening walk in which walkers carry illuminated balloons: white for survivors, red for supporters, and gold in memory of a loved one lost to cancer. These communities of walkers gather together on this special night to bring hope and light to the darkness of cancer.

Sign up for a walk and learn more about the Leukemia & Lymphoma Society here.