Call off the bump watch! The country crooner says she’s not ready for kids and dishes on a recent dress disaster due to Randy Jackson. 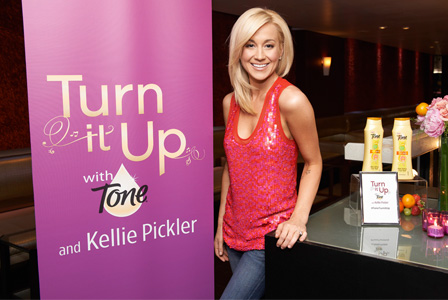 Kellie Pickler has come a long way since she was on the fifth season of American Idol! The bubbly blonde is married to songwriter Kyle Jacobs, touring for her new album 100 Proof and now she’s teamed up with Tone Skin Care, too.

“I’m so excited about our partnership together,” Kellie told SheKnows when we caught up with her in NYC. “If you go to Tone Skin Care’s Facebook page, you can check out all the details on how you can win packages of free products, my CD signed, concert tickets, meet and greet tickets and hang out with me at one of my shows, so that’s really a fun way to get people involved and the fans involved.”

Kellie says her favorite product is their new exfoliating body wash. “The Tone fruit peel body wash smells really good. It’s very hydrating. I use it to shave with, too!”

She also relies on MAC products to glam up on-stage and in everyday life. “I love MAC,” she shares. “They’ve come out with some stuff I like that can be used for everyday wear, but they have really good stage makeup.”

Although she always manages to look camera-ready, Kellie says she once had a major fashion disaster during a major awards show, thanks to one of the Idol judges.

“Randy Jackson accidentally stepped on the back of my Badgley Mischka dress and the whole back ripped off!” Kelly explained. “He didn’t know that he did because I didn’t say anything. We were presenting together and he accidentally stepped on my train coming up. I come off stage and literally had two minutes on stage to change before I had to go back and perform.”

Poor Kellie had yet another wardrobe malfunction during the performance. “As soon as the music started, I put my hands up to start clapping and my bracelet and earring flew off. I was like, ‘Oh my gosh, these are loaners!’ I’m just glad my dress stayed up.”

Kellie says her husband joins her on the road sometimes and that they’re not trying to have kids anytime soon. “We’re not trying,” she told us. “We’ve only been married a year and a half and there’s so much we need to do, just he and I. There are places we need to go and things we need to accomplish before we jump into the whole baby world.”

Kellie turns 27 next week and plans to celebrate with Kyle, whose birthday is just a day from hers. “We both love Jack Daniel’s and both of us have always wanted to go to the distillery, which is in Tennessee,” she shared. “So we’re gonna go out there and do like a private thing. Then we’ll probably do dinner and go home. We’re very much homebodies!”

With a crazy touring schedule, who can blame her for wanting some downtime with her guy?

Can’t make it to one of Kellie’s shows? You can keep up with Kellie on tour by visiting Tone’s Turn It Up! Facebook page and register to win goodies and giveaways.

1 hr ago
by Summer Cartwright