Nicole Lapin has wasted no time in her rise to the top. The youngest anchor ever at CNN and, later, CNBC, Lapin has used her smarts to help young women of any means achieve financial independence. She also spearheads a fabulous website Recessionista.com. Here are her secrets to her soaring success… 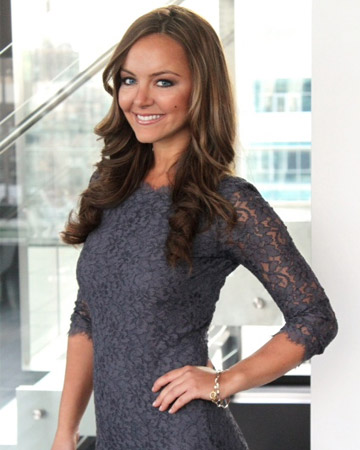 Age and the workforce

SheKnows: As the youngest anchor ever on CNN and CNBC, you’ve accomplished so much at such a young age. Has your age been a factor in furthering your career?

When I first started at CNN, I was so concerned with trying to look older than I was: wearing shoulder pads, fake eyelashes and teasing my hair sky-high. I looked ridiculous. I’ve always been an old soul, but I had to learn to grow my age… to grow young, in a way.

SheKnows: Do you feel being young has hindered you in any way?

I used to see being young as an obstacle to overcome: Would people take me seriously? Would I be as credible? But now I realize it’s one of my biggest assets. I have this opportunity to reach out to an entire generation of young people, and there is so much I still want to do — and I have the time and energy to do it!

SheKnows: You have had great success in the broadcasting field as well as in the world of finance. Did you always have a love for both?

I always knew I wanted to work in news, but I did not feel the same way about finance. I didn’t grow up in a house where we read The Wall Street Journal; in fact, we would talk about pretty much everything else around the dinner table except for money. But after serving as a business reporter at First Business Network in Chicago, I started learning more about business and finance. That knowledge is empowering and gave me a new appreciation for that world.

SheKnows: Has it been difficult to reach the stage of success you have achieved? What do you feel has been the key to climbing to the top so quickly?

I may be young, but I’ve been in this business for a long time. I started working when I was 15 and landed at CNN when I was 21. I didn’t wait around for anyone to hand me some fancy opportunity — I went out there and got it. So, yes, it’s been difficult at times, but with a little “less talk, more action” attitude I was able to get to where I am today.

SheKnows: How did you come up with the idea to begin Recessionista?

With the economy in the you-know-what-er yet again, I felt an urgent need to provide accessible financial content to young women who want to be frugal but still fabulous, even during a recession. It’s the sensibility of The Economist but as fun to read as US Weekly — and no one else was offering that to a younger generation.

SheKnows: Could you share a Recessionista success story with us?

Entrepreneurs are the winners of this recession, and I’ve seen that proven by some of the amazing women we’ve featured on our site. I’m inspired by celebs like Lauren Conrad, who have capitalized on their fame to create business empires and long-lasting careers, as well as ordinary women like Dera Enochson, who turned being laid off into a major blessing by following her dreams and starting her own beauty line. These women are scrappy and demonstrate what it is to be a true Recessionista — living a life that is frugal and fabulous, no matter what!

Gender and reaching for the stars

SheKnows: What famous person do you feel exemplifies the meaning of a Recessionista?

Diane von Furstenberg! She’s made it cool to be the everywoman — pretty and practical — and offers clothing and accessories that look fab no matter where you’re running off to. Plus, I live in her dresses.

SheKnows: Do you feel there are any unique challenges you face as a woman in your career?

I don’t think I face any additional challenges as a woman, in my career or otherwise. I get to give a voice to people who don’t have one and help young people who are part of this “Lost Generation” — who are marginalized and unemployed — to find their own voice and knowledge about business and finance. That privilege and responsibility is gender-neutral!

SheKnows: What advice would you give to other women just starting out in their career path who want to climb the corporate ladder quickly?

SheKnows: What are your goals for the future of your career?

At this point I’d say: What isn’t my goal?