You’ve just bought a gorgeous dining set for your new house only to notice that you blew your budget on the fancy table and you’re stuck with that outdated 70s chandelier from the previous owner. 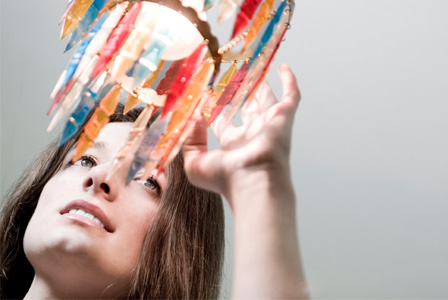 Instead of fretting and going even more over budget on an expensive chandelier (and hiring someone to hang it), make your own and hang it yourself with this home how-to!

Nothing adds glamour or elegance to a room like a chandelier, and nothing brings peace of mind quite like saving a bunch of money! Instead of spending a ton of money on the chandelier and the electrician, make your own and install it yourself! (Note, this home how-to is just as relevant to those trying to replace a chandelier.)

Making your own chandelier sounds hard, but that couldn’t be further from the truth. Some chandeliers are as easy as hanging Mason jar lanterns! Plus, there are so many different kinds of tutorials out there that fit every budget, theme and design style. For a great list of SheKnows-recommended DIY chandeliers, check out these great DIYs, including beaded chandeliers and some made with crepe paper!

Be sure to turn off the electricity in the room where you are working by switching off the circuit breaker for just that room. Next, you want to unscrew and carefully lower the other fixture to reach the electrical box. Slowly and carefully remove the twist connectors from the wiring and then detach all the wiring so the fixture is free. Place the fixture down gently.

Using a screwdriver, remove the screws that hold the electrical box in place. If it’s a metal box, loosen the screws on the cable connector, then carefully slide out the connector. If the box itself is plastic, use a slotted screwdriver to pry up the plastic fin that holds down on the cable, then pull the cable free.

Although it’s typically recommended for chandeliers that weigh more than 40 pounds, it’s advised to install ceiling support regardless of weight, especially if your ceiling is made of thin plywood or strand board. To install the ceiling support, grab a fan brace (typically used to hold ceiling fans). Remove the brace from the box and slip it into the hole (where the previous chandelier’s electrical box was). Spin the brace so it’s horizontal and both sides are resting flat on the ceiling drywall. Tighten the brace until you can feel the prongs dig into the joist (or the horizontal supporting beams that run from wall to wall in your ceiling).

Not making sense? Check out this girl’s guide to home improvement >>

Many fan braces come equipped with an electrical box. However, if yours does not, go to Home Depot or Lowe’s and ask a specialist for the recommended size for your project. It’ll help also to bring a photo of your chandelier so he/she gets an idea of the size. If you have an electrical box (get one with an integral cable connector), use your slotted screwdriver to pry one of the knockout plugs (these should be prepunched and labeled) from the side of the metal electrical box. You’ll then want to hold the box close to the ceiling. You may want someone else to help you at this point and give you the cables to string through the connector. To ensure the cable works, pull about six inches of cable into the box then tighten (using the screwdriver) the connector screws to be sure the cables are locked in place and won’t move.

Once you have the box ready, you want to bolt it to the fan brace so it stays put. Your brace should come with nuts and bolts you can use to bolt it in place. Follow the instructions carefully on how to bolt it in place with the pieces it came with (instructions should come with your fan brace, if not, consult someone at your nearest hardware store.) Once you’ve bolted your box, push it up into the ceiling and secure it to the U-bolt on the fan brace. Be sure to tighten the screws with a nut driver.

Check out how you can be your own handywoman >>

Step 7: Connect the wires and secure the base

As soon as this is done, the chandelier’s shades, light bulbs, Mason jars or beads can be installed on the chandelier and then tested!