Oops… even celebrities get it wrong sometimes! We’re telling you why Julianne Hough and Zoe Saldana’s fashions fell short in our new weekly feature. Learn from the stars’ sartorial slip ups! 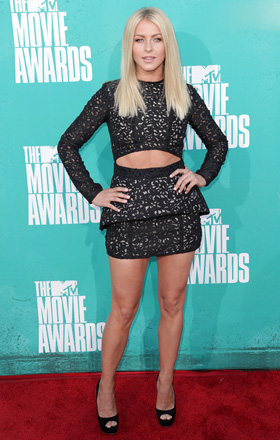 She must have given boyfriend Ryan Seacrest the night off from approving her wardrobe… what else could explain the dress Julianne Hough wore to the MTV Movie Awards? The Rock of Ages hottie usually rules the red carpet but we’re not wild about this midriff-baring Sally LaPointe creation she chose.

Dancing with the Stars alum Julianne has an amazing body but something about this frock isn’t figure flattering. The super short hemline, combined with the peplum and cutout over her abs chop up her petite frame and make her look less svelte.

Sure, anything goes at the MTV Movie Awards, but we think this lacy dress would have looked more chic with the cutout in the back instead of in the front. She’s already showing a lot of leg in this look, so it’s good to leave a little to the imagination.

The final verdict? It’s not the worst look ever, but we know Julianne can do better! She’s on the verge of becoming a huge breakout star, so we hope she’s ready to step up her fashion accordingly. 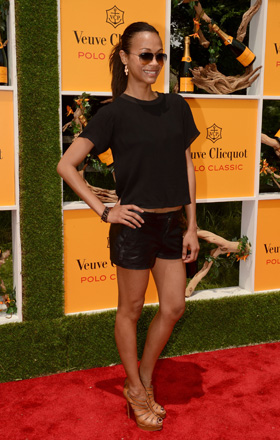 Let’s start by saying this outfit is totally fine for many occasions — like walking around the city or heading to lunch or drinks. But black leather shorts and stiletto heels are so not right for a polo match!

When we think polo, classy, casual-chic and preppy attire immediately come to mind. A floral sundress or a flowy maxi dress with wedges or flats, like Rachel Zoe chose, would be perfect. But instead, Zoe Saldana wore an all-black, biker babe ensemble to attend the Veuve Clicquot Polo Classic.

Besides the fact that it looks totally wrong for the annual event, stiletto heels make no sense for this function, where VIPs sip bubbly under a tent in a grassy field at Liberty State Park. With those massive heels, Zoe was probably leaving divots in the field like the horses do instead of stomping them down mid-match, as tradition dictates.

The final verdict? Her outfit is cute, but it’s not practical or appropriate for polo. We do love her stylish shades and sleek ponytail, though.