Oops… even celebrities get it wrong sometimes! We’re telling you why Lady Gaga and Kristen Stewart’s fashions fell short in our new weekly feature. Learn from the stars’ sartorial slip ups! 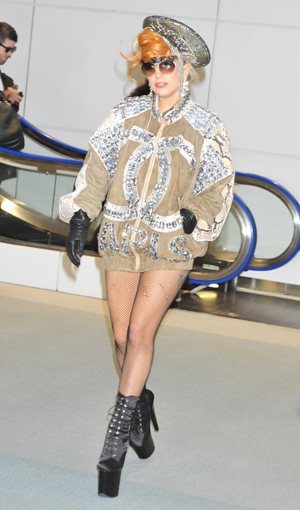 You’ve gotta love Lady Gaga. Whether she’s wearing a dress made of meat or making a red carpet appearance in an egg, the pop star is never afraid to take a risk. But just because you’re pushing the envelope doesn’t mean you’re making our best dressed list.

Take this ensemble that Gaga wore when she landed at Narita Airport in Japan. Most people like to be comfortable when they take long flights, but wearing no pants is taking it to another level!

The only thing she wore on her bottom was a pair of ripped fishnet tights. And on top, the jacket was oversized, blinged-out Chanel, just in case you couldn’t tell. Doesn’t Lady G know that covering yourself in massive logos is so 2001?

The “Born This Way” singer also rocked sky-high heels that look like she borrowed them from a streetwalker, ginger hair, leather gloves and a military-inspired hat.

The final verdict? There’s so much no happening here. Just because you were born this way, Gaga, doesn’t mean you should leave the house with no pants! We admire your fearless fashion, but this isn’t one of our favorite looks on you. 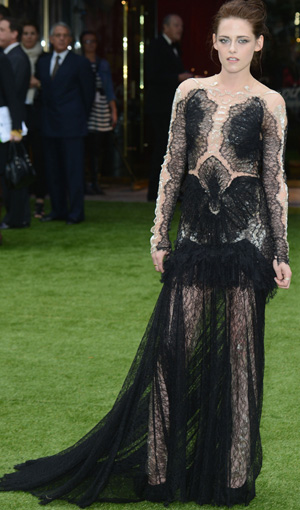 We’ve got to give credit where credit is due. K. Stew has really stepped up her style in the past few years. The girl who used to constantly wear sneakers and jeans glammed up for the Met Gala in NYC last week, and she wore this Marchesa creation to the London premiere of Snow White and the Huntsman this week.

This black, lacy creation could have been a hit for the Twilight actress, but there’s just a little too much going on. From the lacy cutout bodice and sleeves to the long train and see-through skirt, it’s a bit overwhelming.

This dress would be stunning with a few simple tweaks to streamline it. We think it would look fab sans the train as a sleek minidress or by simply making the bottom half of the gauzy gown solid instead of see-through.

The final verdict? We see London, we see France, we can almost see Kristen’s underpants! The peekaboo lacy lower half of the dress is too revealing, but we give her props for trying an edgier, more adult look. She’ll have a second chance when she hits the carpet at the Cannes Film Festival this weekend!