Technology moves fast these days, so it’s not surprising that there are cameras that exist that take high resolution photos and videos. But some of those cameras exist as fully-functional versions of both devices! Rather than being a digital camera that takes video or a camcorder that take photos, these all-in-one cameras do both, flawlessly. 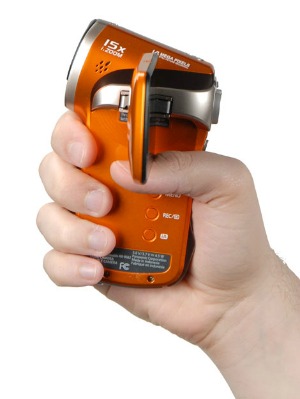 Go ahead. Toss it in the water! This all-in-one device can be submerged up to 10 feet to take photos and videos of your snorkeling escape and underwater life. Plus, it has a 14-megapixel camera for those perfect underwater still shots. It’s not just an underwater device, though. The camera can easily be taken on land. Capture your perfect shot with the rotating 2.6-inch wide LCD screen.

Hey, kids want to have fun with cameras, too! This kid-specific camera is easy both to use and to figure out. It includes both a digital camera and a video camera. Plus, your kids can have fun with the works of art they have captured in the photo editing software, where they can add funny effects. The Kidizoom stores an astounding 500 photos — almost as many as a normal digital camera — and it has two-megapixel resolution. When your child grows tired of capturing photos on the long ride to your travel destination, he or she can sit and play a number of games located right on the camera. It’s the perfect device for keeping your child entertained, yet feeling like a fully-grown adult.

The iPhone? Really? Yes! The eight-megapixel camera on the back of the iPhone is just as powerful as many of the point-and-shoot cameras you can buy at the electronics store for about the same price. You can crop photos directly on the screen and upload to Facebook, Flickr, Tumblr, Twitter and other social networking websites right from your phone. Capture HD video in 1080p, rife with vivid colors and sharp contrasts. The video stabilization feature allows shaky hands to be steadied by allowing the user to tap what they want to focus on. The “camera” does the rest. You can transfer video directly to iMovie, where you can edit your videos into your own mini feature film. Combined with FaceTime video chat, you’ll never have to skip capturing another moment as long as you have your iPhone in your pocket.