Oops… even celebrities get it wrong sometimes! We’re telling you why Nicki Minaj and Lauren Conrad’s fashions fell short in our new weekly feature. Learn from the stars’ sartorial slip ups! 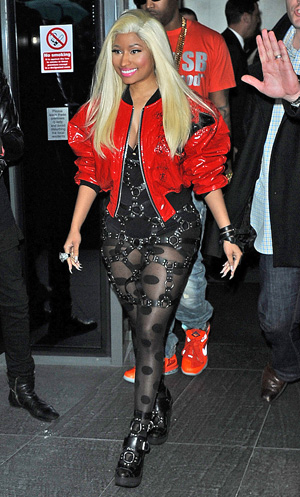 What the fug?! Superbass rapper Nicki Minaj is known for her kooky style, but this bondage Barbie-esque is just superbad. We barely know where to begin with this awful ensemble! First of all, it seems she forgot to put on pants before leaving her hotel in London and simply opted for polka-dotted stockings instead.

And just where exactly was Nicki heading in this getup… an S&M convention? She’s wearing a bodysuit with some kind of full-body harness that looks really uncomfortable and hard to walk in. Combine that with those platform boots and poor Nicki is just fashion road kill waiting to happen.

Finally, she paired this whole look with a bright red patent-leather jacket that just screams “cheap” and super long nails. Nicki recently deleted her Twitter, but she should really delete this outfit from her wardrobe permanently.

The final verdict? This is the walking definition of a hot mess. Please save the S&M gear for behind closed doors. We do love her blonde wig, though! 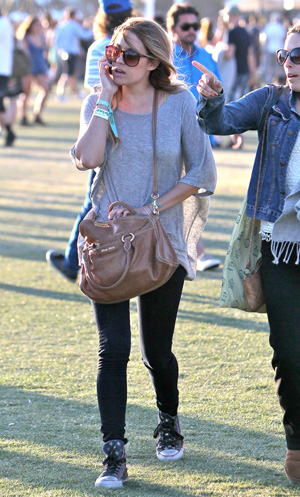 We love us some LC. The Hills starlet turned author has grown up quite nicely in the spotlight and managed to stay normal, unlike some of her former castmates (Speidi, anyone?). But when she hit up Coachella in California this weekend, we wished she had spiced up her style just a bit.

Coachella may be a music fest, but really, it’s all about the fashion. Celebrities flock to the desert to show off their best colorful bohemian chic looks. And while other fashionistas like Nina Dobrev and Paris Hilton rocked bright breezy outfits, Lauren’s look just leaves us yawning.

She could be doing a grocery run in this! Lauren has a great figure but you’d never know in that gray baggy top. We’re also confused why the budding designer chose boring black jeans for the fest. With so much amazing pastel and neon denim out there, she played it totally safe.

She should also save the high-top sneakers for walking her dog, not walking the fields. Gladiator sandals or funky flats would be just as comfortable and so much cuter!

The final verdict? LC’s style is usually great, but for Coachella, you’ve got to spice it up a bit. It’s all about getting in touch with your inner flower child and having fun with your fashion. Better luck next year, Lauren!