Mitt Romney has all but shored up the GOP nomination for president in 2012, but a new entrant has just declared her candidacy: Barbie! The stylish doll is running for president for the fourth consecutive time — and Barbie is doing it in a custom pink suit from designer Chris Benz. 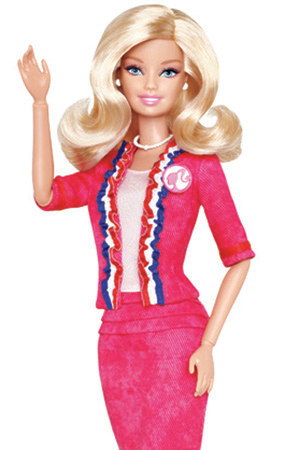 OK, it’s high time we have a woman as president. Sure, we came close with Hillary Clinton, but now we’ve got a candidate that can surely clinch the nomination and office: Barbie! The iconic Mattel doll — who just celebrated her 53rd birthday — announced her intention Wednesday to run for president for the fifth time.

This time, Barbie’s got someone super stylish in her corner: CFDA award-winning designer Chris Benz. The designer created Barbie’s look in a suit that “features a patriotic red, white and blue trim and is complemented by a classic pearl necklace,” Benz said in a statement. “A pink shirt completes her look along with modern and fashionable wedges, which actually allow her to ‘stand on her own’ using weighted wedges.”

She can now stand on her own? That’s more than some presidential candidates can do, right?

Barbie is running to encourage a new generation of women to “B inspired,” “B informed” and “B involved” in the aptly-named B Party. She knows a thing or two about going after her dreams — she’s worked in a variety of career fields, including as an award-winning architect and in computer engineering.

Barbie’s come a long way from her beginning years as a weight-obsessed doll, huh? Get your mitts on President Barbie in June at retailers for a recession-friendly price of $14. 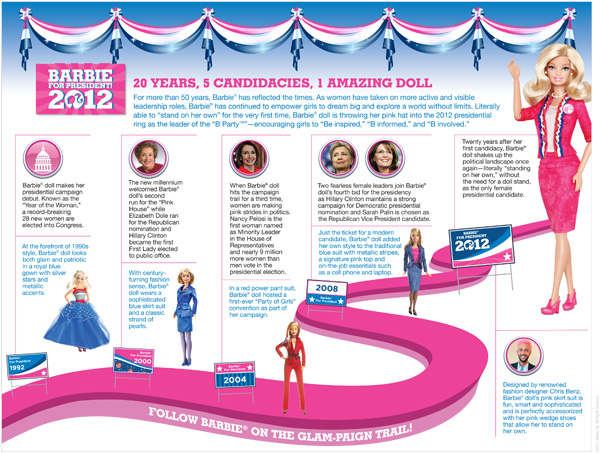 Read on for more Barbie