Oops… even celebrities get it wrong sometimes! We’re telling you why Katie Holmes and Ashley Tisdale’s fashions fell short in our new weekly feature. Learn from the stars’ sartorial slip ups and fashion mistakes! 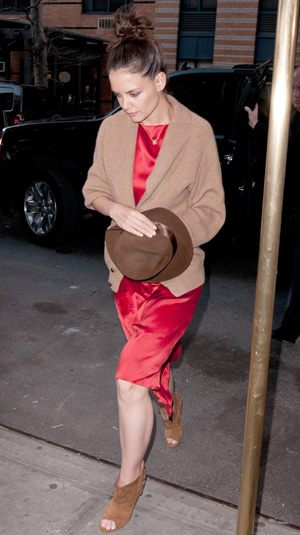 Mrs. Tom Cruise looked bummed as she stepped out in New York City this week, and we don’t really blame her. This outfit isn’t doing her any favors! Suri’s normally stylish mom started with a coral silk dress, which we love. The bright color is perfect for spring, but what’s up with the frumpy sweater she wore over it?

The camel oversized cardigan is baggy and too casual for the cocktail dress. We would have chosen a fitted blazer instead or a belted trench coat to cover up.

Katie‘s suede ankle boots would look cute with skinny jeans, but they shorten her legs when worn with this dress. A pair of nude pumps would lengthen her legs and make for a more polished, put-together ensemble.

Finally, she’s holding a fedora, yet her hair is up in a bun. You can’t wear a hat if you have your hair up, so she should either let down her locks or ditch the hat.

The final verdict? Katie, who’s a designer herself, began with a great basic element, but her accessories were too casual. 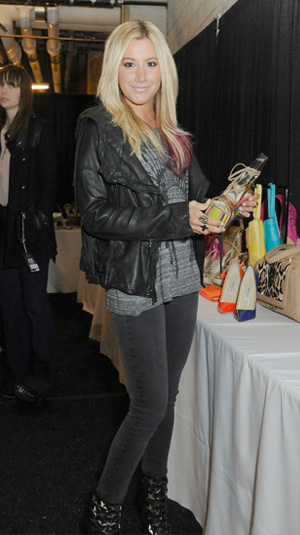 We get that the former Disney star is all grown up, but Ashley Tisdale is trying too hard to be edgy. She hit the LA Lakers shopping event for charity at the Staples Center, and we sincerely hope she picked up some new shoes for herself at the sale.

Her skinny black jeans are in style, but the clunky boots with silver stars have got to go! What would Sharpay, the character she played in High School Musical, say about them?

Ashley also showed off some bright red highlights. Crazy colored hair is a major trend among celebrities (hello, Katy Perry!), but combined with her baggy tee and leather jacket, it just feels like Ashley is going overboard trying to shed her squeaky-clean image.

The final verdict? It’s great to see 26-year-old Ashley trying a more mature look, but she should stick to trying one funky trend at a time.