Fashion Star contestant and Seattle-based designer Lizzie Parker sits down with us to chat about life behind the silver screen, her bonding moment with Nicole Richie and whom she is dying to design for on the red carpet.

Related story NBC orders up a pilot for Jessica Simpson 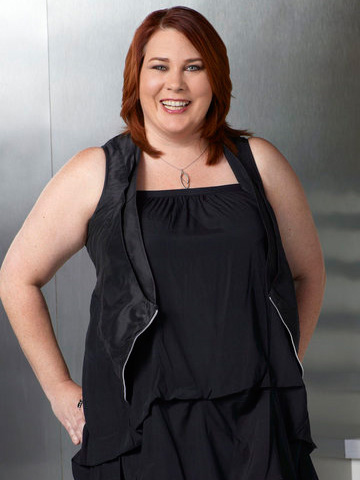 This mother of two and knitwear expert has already sold a design to Macy’s and has gotten syle and design advice from some of America’s biggest designers… and we’re only on episode three!

Read on to see what’s next for this true fashion star. (Believe us, we guarantee you’ll be wearing her designs soon — if you’re not already.)

SheKnows: Who is your favorite mentor on Fashion Star? John Varvatos, Jessica Simpson or Nicole Richie?

Parker: John. I was terrified to meet him at first because he’s so massive, but he gave me great advice on designing my knitwear with cutting and coating, etc., which I used on the show and in my recent L.A. Fashion Week show.

It also was great talking to Jessica about designing for the masses because she really is an expert on that. We also laughed a lot! She is one of the nicest people! To be honest, Nicole and I really are completely different. I do solids, she does prints… but we actually bonded on our love of heavy metal. She likes Metallica too!

SheKnows: Buyers from Macy’s, H&M and Saks critique your designs every week, so out of the three, where do you most see your clothes being sold?

Parker: Definitely Macy’s because I design for the modern everyday woman. I make clothes for real women. But with that being said, every designer wants to be featured in Saks!

SheKnows: Since you do design for real women, do you ever wish to branch out into couture?

Parker: I had a moment where I thought I should design a couture line for the red carpet, but it’s just not me. I would actually love to design a leather jacket line, rather than ball gowns — something every woman in America could purchase and wear forever. 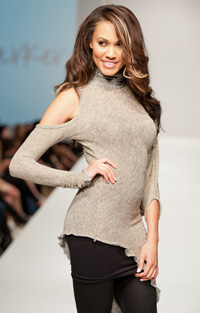 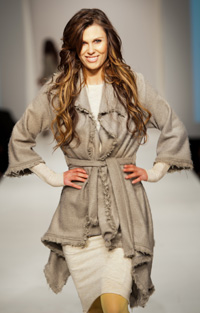 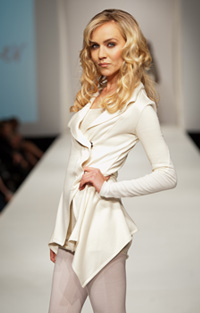 SheKnows: You live in Seattle, so how does the city influence your designs?

Parker: Most of my pieces are solid with muted colors, which is very Seattle. I love black, white and gray. The way people dress in Seattle is very stylish and intelligent, so that’s whom I design for.

SheKnows: Does your store in Seattle also reflect your muted aesthetic?

Parker: I’ve had the store for three years now, and the store itself has a very eclectic aesthetic with an industrial interior with metal furnishings. Very me.

SheKnows: Do any current designers influence you?

Parker: Rick Owens. I’m obsessed with him because his aesthetic and philosophy on design is similar to my own. I actually emailed him in 2006, and he got back to me and told me to stay independent and true to myself, just like him, which is advice I live by in my designs.

SheKnows: OK, we have to ask: What celebrity would you love to design for?

Parker: Angelina Jolie. She is a rocker mom, just like me! She also lives in knitwear, which is what I design. I’m actually also adopted, and so is one of my children, so I really support all of the causes she is involved in.

SheKnows: What’s next for you on Fashion Star?

Parker: You’ll have to stay tuned! But fortunately, so far, I’m thankful how they’ve portrayed me because you really get to see the real me.