Katniss Everdeen is one literary character we’re actually proud to see our sisters and daughters emulate (we’re looking at you, Bella Swan). Author Suzanne Collins purposely described her heroine in simple terms so we can create our own image of her. The movie version of The Hunger Games has given us a more definite look at Katniss’ clothing and style, but we still have our own visions of what she should be wearing. 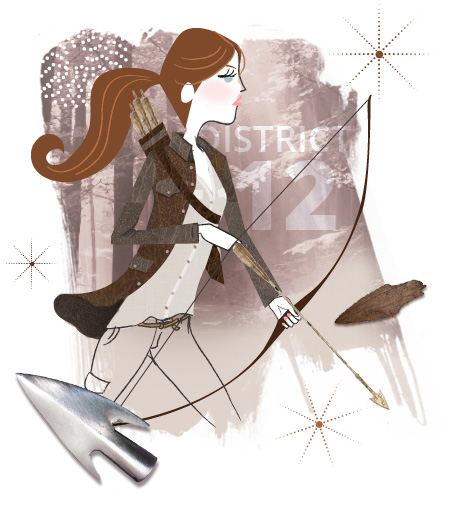 Katniss Everdeen’s day-to-day life in the Seam is bleak, to put it mildly. The 16-year-old is forced to hunt all day to support her mother and sister and doesn’t have the time to put any ounce of thought into her look, other than her signature braid. We imagined Katniss’ clothing to mirror that of a more modern Annie Oakley, except substitute a bow and arrow for a shotgun. Our favorite archery expert doesn’t wear skirts, though — we’re thinking more fitted cargo pants and button-down linen shirts instead of a pioneer hoop skirt. Still, both Katniss and Annie are one-in-the-same: They don’t take crap from anyone — and they certainly don’t bow down to The Man, or in this case, The Capitol. 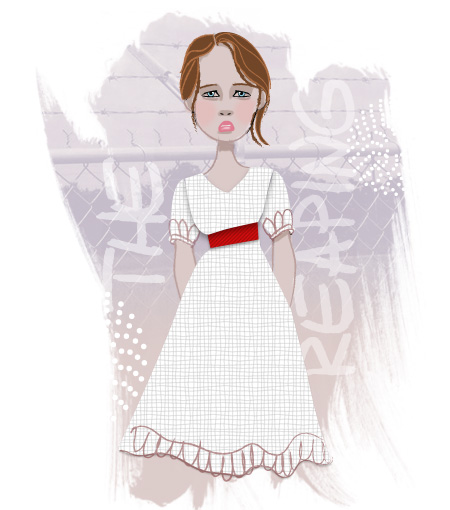 The Reaping is the only part of the story when Katniss appears somewhat vulnerable — and that’s only because of the terror she faces when her sister, Prim, is called up as a Tribute. To play up this vulnerability and uncertainty, we imagined Katniss’ Reaping dress as a simple white peasant-style dress accessorized with a ribbon and empire waist. After all, our heroine barely has enough food to survive on, so she’s not going to be decked out in fancy dresses like Effie Trinkett. 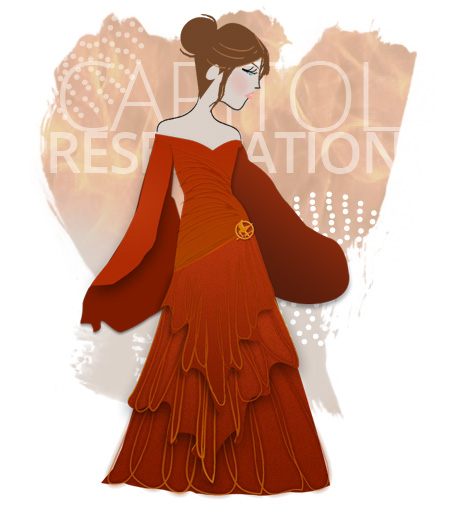 Our first thought when we read about Katniss’ fiery look at the Capitol presentation was of Fleetwood Mac’s Stevie Nicks. We’re not exactly sure why — the “Gypsy” singer’s style doesn’t exactly scream post-Apocalyptic society. However, Nicks’ penchant for flowy, sheer dresses with lots of color and serious attitude mirror Katniss’ fire much better than the fitted orange dress shown in stills from the film.

Oh, and a gauzy dress would give off more of an illusion of fire since filmmakers (obviously) couldn’t use real fire on Jennifer Lawrence in the film. Not that she minded.

“Was everybody disappointed that I wasn’t set on fire? God, that was a high, high bar to set. ‘Oh, darn it, she didn’t set herself on fire,'” she told MTV News. “That’s unfair. I don’t ever want to have to put myself on fire. Why am I constantly disappointing myself when I’m not putting my life in danger? That’s not right.” 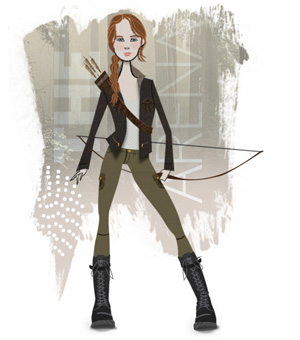 Is there anyone as bad ass as Katniss when she outsmarts even the toughest opponents during The Hunger Games? There isn’t. The laser-focus of our heroine is apparent in every page of the book — she’s fighting to stay alive, after all. This take-no-prisoners attitude is exactly why we envision Katniss wearing clothing similar to a Tomb Raider-era Angelina Jolie, complete with fitted leather jackets, white tanks and serious man-stomping combat boots. Shrinking flower, she’s not.

Lawrence wasn’t even sure she could be as strong as Katniss.

“I wish that I did [have her strength.] She’s strong,” Lawrence told OnTheRedCarpet.com in an interview. “I would’ve been like [in a sheepish voice] ‘I volunteer.’ Cried and like cried the whole train ride and just stayed on my podium when they counted down [in the arena] and just cried. It would’ve been different.”

Love it or hate it? SheKnows editors review The Hunger Games