Being vegetarian can be a challenge when traveling, but it doesn’t have to be! Visit one of these veggie-friendly cities around the world and enjoy the breadth of that locale’s incredible – and meat-free – cuisine. 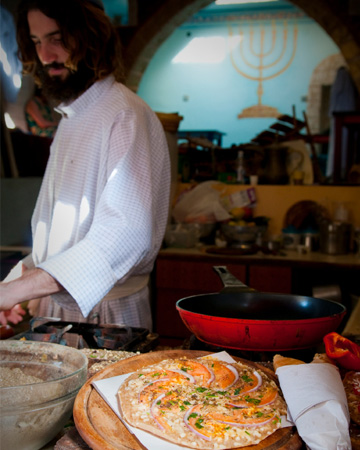 Because kosher law requires the separation of meat and milk, any restaurant that is labeled “kosher dairy” is guaranteed to be meat-free. Since most restaurants in Jerusalem are kosher (more so even than the rest of Israel), this Middle Eastern city is a vegetarian’s dream come true. So veggie tourists don’t have to miss out on the most famous Israeli street foods like hummus and falafel.

For a place that loves its bangers and mash and fish and chips, London is a surprisingly vegetarian-friendly city. It was even named the best city for vegetarians by animal rights group PETA in 2009. In addition to its wide array of meat-free ethnic options, Brits are conscientious about marking veg options with a “v” on menus and providing meat-free versions of their favorite national foods — vegetarian shepherd’s pie, anyone?

At least one-third of all people in India are vegetarians, and Mumbai is said to be home to the largest vegetarian population in the world. Meat-free options abound throughout the entire country, and with Mumbai the largest city, the choices seem endless. Restaurants are all clearly labeled veg (which often means dairy products but no eggs) or non-veg, and even all supermarkets have a clear labeling system for indicating what contains meat.

As a young, hip, sustainably minded city it’s no big reveal that Portland is one of the most veggie-friendly destinations in the US. You’ll be hard-pressed to find a restaurant that doesn’t have meat-free options, and vegetarian restaurants — not to mention the many vegan options — are ubiquitous. From hipster bars with vegan drinks and tofu dogs to haute vegetable-centric restaurants, there is something for every vegetarian.

Home to a large Buddhist population, there are nearly 2 million vegetarians in the capital of Taiwan,  making it a clear veggie-friendly choice. There are more than 6,000 meat-free eateries in the city and, like Mumbai, foods in Taipei are carefully labeled for vegetarians. The city is famous for its vegetarian buffets, which offer what seem like miles of meat-free dishes for the sampling, all for about $5.

Read more about these destinations

Experience London without breaking the bank
Travel India: An Indian odyssey on camel back
The 10 healthiest cities in America