The sexy star hits a newsstand near you tomorrow as Cosmopolitan’s April cover girl. 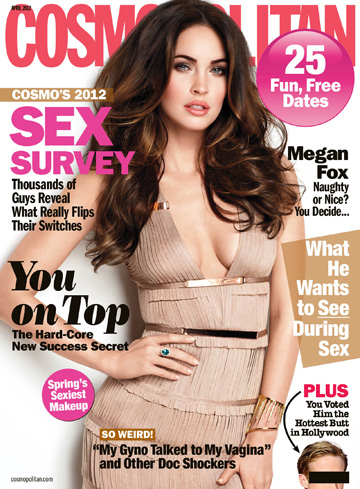 One of Hollywood’s toughest chicks isn’t as wild as you might think. At least, that’s what Megan Fox says in an interview with Cosmo, hitting newsstands tomorrow.

“It’s because I have tattoos and I say curse words, and apparently, that’s crazy. I think maybe I give off this energy of seeming like I don’t give a f***, and that’s misinterpreted. But I’m not wild,” Fox says.

The stunning actress has certainly gone through some personal and career highs and lows, but she says it’s all strengthened her as a person and enhanced her relationship with husband Brian Austin Green.

“We’ve had obstacles, and we’ve overcome them. I truly feel like he’s my soul mate. I don’t want to sound corny or cliché, but I do believe we are destined to live this part of our lives together,” Fox tells the magazine.

But way back when, Fox says she wasn’t even sure who her future Mr. was: “I didn’t know who he was, since I was too young for Beverly Hills 90210. But the first time I saw him, I got butterflies. And the first time he casually touched me? There was so much electricity.”

We want to know

Will you be picking up Megan’s cover?