Each day of Mercedes-Benz New York Fashion Week 2012, the SheKnows Beauty team is bringing you a new designer spotlight of the day… Diane von Furstenberg is a style icon to the fashionistas of, well, everywhere. Find out more about the fashion mogul. 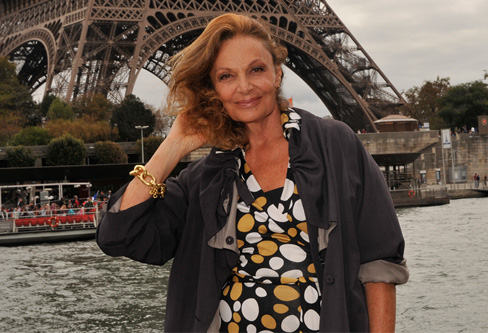 Diane von Furstenberg, born in Brussels, Belgium, is an icon and globally known fashion designer who first arrived on the fashion scene in 1972 with her famous wrap dresses. By 1976, her wrap dresses had become a huge success and she had sold over a million of them. After taking a hiatus from fashion, she arrived back on the fashion radar in 1997 with a relaunch of her iconic dress.

After that, the rest is history. Von Furstenberg now has ready-to-wear lines of clothing, shoes, handbags, accessories, eyewear and much, much more.

In 2005, she was awarded the Lifetime Achievement Award from the Council of Fashion Designers of America and, just one year later, was elected the CFDA’s new president. She still holds that position to this day.

It’s not hard to see that Diane von Furstenberg has had an exquisite and amazing influence on the fashion scene and fashion trends for years, and the fact that she has always been a firm believer in the infinite power of women just makes her and her influence more prominent.

Her first marriage was to Prince Egon of Furstenberg in 1969, making her Princess Diane of Furstenberg. They had two children: Prince Alexander and Princess Tatiana. They divorced in 1972, and though she continues to use his last name, she’s no longer entitled to the title princess.

She’s now married to American media mogul Barry Diller, and in 2012, she established the DVF awards with the Diller-von Furstenberg Family Foundation to honor women who have displayed leadership, strength and courage in their commitment to their causes.

Through all her success, von Furstenberg still happily maintains, “Children are my greatest creation.”